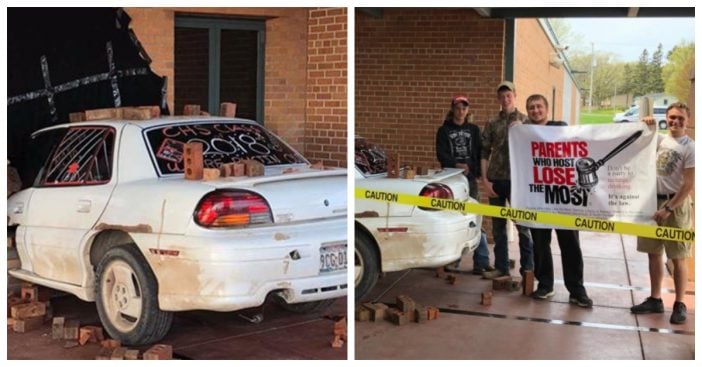 The local high school seniors of Cumberland, Wisconsin decided to have a little fun for the end of the school year. Who knew it would include the local police department, too?

It was a trending moment on Twitter when Wisconsin students wanted to pull the ultimate senior prank, but they needed a little extra help. Following praise of the local police, they were able to set up the most impressive and unique prank the Internet has ever seen!

Even the police department had to give the class of 2018 props for this senior prank. https://t.co/RaMroCYPTM pic.twitter.com/VgP8vgB6Fz

The officers shared a photo that seemingly looked like a nasty car crash directly into the school building, but was actually half a car, a black tarp, and bricks. They made it look pretty realistic, too!

According to the school’s official Facebook post regarding the situation, the ‘car crash’ was set up right outside of the principal’s office! The schools’ administration seemingly got a kick out of the prank, considering no actual damage was done. The back of the car was painted with the quote, “CHS Class of 2018, We’re Bustin’ Out!!!” That was a pretty smooth pun there, guys, not going to lie.

The Facebook post opens with, “Graduation week… Nice work seniors!” It follows with, “You had everyone a little nervous this morning! The police department is saying this senior pranks was ‘one of the best senior pranks that Cumberland High School has seen.'”

Since the news went viral on May 15th, 2018, the Internet had lots to say about the situation — mostly positive!

“Original” is an understatement. This is one of the most unique and meaningful senior pranks ever! The police loved the prank because it involved absolutely no damage to the school, and it promoted a positive message.

One of the teens in the photo is holding a sign that says, “Parents who host lose the most,” a slogan for the Prevention Action Alliance. Basically, the prank is discouraging parents from hosting parties with alcohol, and discouraging teens from drinking and driving.

They really do deserve an award… and so do the administrators of the school for being such great sports about it!

You thought that was good? Well we seniors at Xavier College Prep brought like 10 watermelons to school and scattered them around campus only to have them removed by the end of first period #seniorszn #bestprank2k18 https://t.co/nDuZ5rMlbN

Do we smell a friendly wager in the making?

If you absolutely love this senior prank,make sure to share this article with your friends! They won’t want to miss out on this epic story.

Previous article: 11 Of The Cutest Flower Names For Baby Girls
Next Post: Dolly Parton Admits She Had An Affair Of The Heart That Left Her Contemplating Suicide