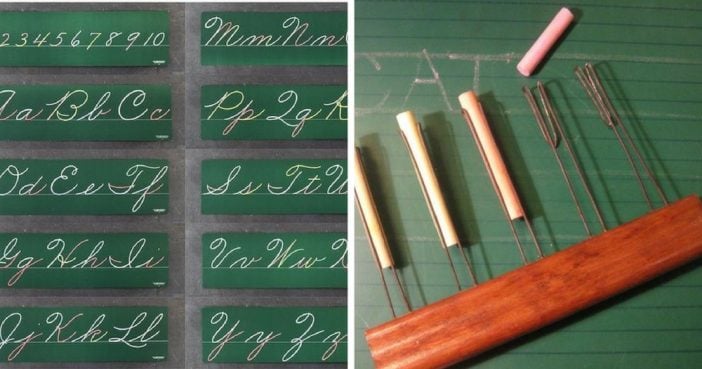 Did you know Cursive writing is making it’s way back into school’s curriculum? I used to sit there with my page of lines and dashes at a full angle and practiced my loops and curves. My handwriting was so pretty and I had a hard-core angle that made it look really unique. Now, I can barely write with a pen and paper!

A study has come out that shows that kids who learn how to pick up a pen and actually write something, versus merely typing it, exercise their brain and are more creative. It’s been a while since I’ve been in elementary school, but apparently most of them quit requiring kids to handwrite after the first grade. The thinking is that their computer skills should be honed, as opposed to learning the slides and loops of cursive.

The study, out of Indiana University shows that something is definitely lost when a kid only taps away on a keyboard. Apparently different parts of your brain are utilized when expressing yourself in different manners; writing by hand is far more thought-provoking, involves spatiality, and requires planning and execution. Working on your laptop demands none of the above.

We’ve all seen kids who seem to be in a trance, madly texting away. While I concede this allows some gains in manual dexterity (though not nearly so much as learning how to write legibly, if not beautifully), for the most part, the end result is a bunch of moronic acronyms and silly remarks.

Remember the cards that ran in a row over the chalkboard at school? The letters of the alphabet were displayed in an elegant script. Staring at that day after day became part of our art appreciation. Surely no one could write so well, so clearly, so flowingly. Yet it was an ideal to aspire to. With practice and dedication one could improve one’s penmanship; the greater lesson wasn’t lost on us. And one could improve one’s self, as well.

Good penmanship served as a life milestone: Attaining it corresponded to attention to detail and newfound maturity. Handwriting a story made it uniquely yours. Judging the uniformity of the characters and the lack of corrections or smudges served as a lesson in self-criticism and became a source of pride. Discovering that bad ideas could be crumpled up and discarded taught us about the ephemeral nature of our thoughts. A well-scripted letter or story became a work of art, our work of art. What better outcome could we hope for from learning how to master a pen or pencil?

I held a little barbecue at my home a couple of weeks ago; some girls in their mid 20s attended. A week after the barbecue, I received a letter in the mail. It was a thank-you card from one of the girls, telling me how much she appreciated my hospitality and the invitation.

I can’t begin to tell you how surprised I was to receive it. Not only did she have the manners to express her thanks, but she also took the time to handwrite these sentiments, address the card, and mail it. The fact that it was handwritten was altogether charming. My estimation of her rose a hundredfold. My immediate reaction was thinking that here was a girl brought up properly.

I’m quite sure I would not have had that same reaction if she had texted me, TY 4 bbq. C u soon. 🙂

There are so many incredible changes going on in the world. So much technology disrupting how we do almost everything. But when it comes to telling someone how you really feel, I’m sorry, but the only way to do it is to write it by hand.