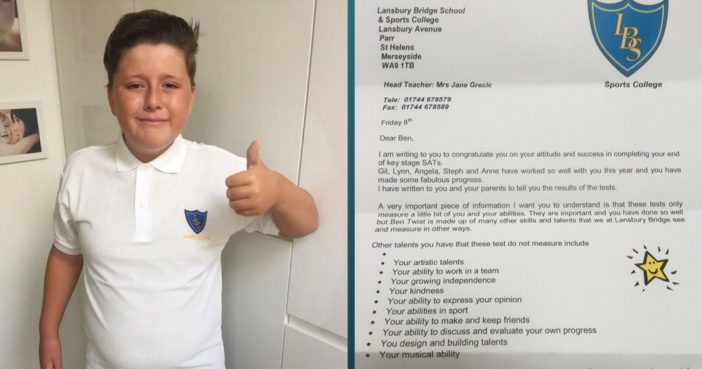 Ben Twist was commended for his artistic flair and kindness in the letter which his mum says was so nice she could barely read it for crying.

An autistic boy who failed his SATs has been given a letter from his school praising his talents which the exams didn’t measure.

Ben Twist was given the heartwarming note by his assistant headteacher after sitting the tests earlier this year.

Mum Gail says she was so touched by the letter – which was sent home with her son on the same day as the SATs results – that she could barely read it for her tears.

The 11-year-old, who attends Lansbury Bridge School and Sports College in St Helens, was diagnosed with autism when he was five.

Gail, also mum to the son, Joseph, who is 13 and daughter, Ava, aged seven, says she couldn’t be more proud of Ben for sitting the exams.

“I was so proud to be told that Ben was going to be able to take his SATs because not many children at the school do.”

“I wasn’t expecting him to pass and he didn’t but I was so proud of him and he was proud of himself for trying and that’s a massive achievement for him.”

“The letter came as a complete surprise, it was just so wonderful and the most beautiful letter I’ve ever read.”

“The fact that they’d addressed it to Ben was just so lovely too, he was so surprised and said how ‘awesome’ it was and couldn’t believe they really thought that about him.”

“He’s such a sensitive and loving child and he’s got an amazing sense of humor – it’s amazing that the school are able to recognize that our children have other qualities than what they are tested on.”

Until September of last year, Ben was in a mainstream school that he loved, but his parents noticed he had fallen behind so decided it would be best to enroll him in a specialist school.

Since attending Lansbury Bridge School, Gail said Ben had made a massive improvement and was getting the one to one support he needed.

Before, he used to get stressed when going to school but now is also excited to go and has made a best friend.

On Friday, Ben came home with two letters, one with his results addressed to his parents and the other one addressed to him from the school’s assistant headteacher Ruth Clarkson.