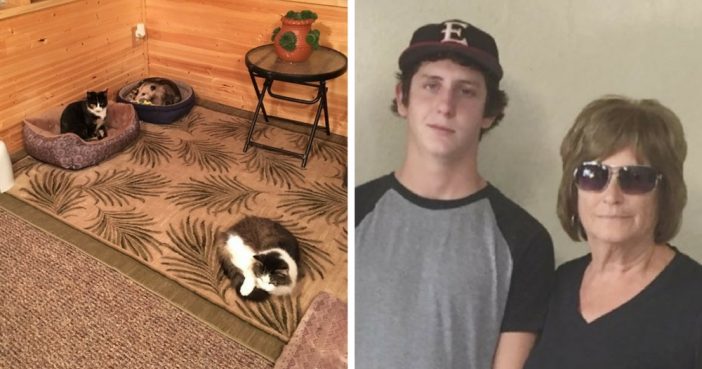 As an animal lover, Eric Hertlein’s grandmother naturally has a soft spot for the handful of stray cats who live around her home in Kansas. So much so, in fact, that she’s set aside a cozy place for them with beds and food on her enclosed porch. Occasionally, she even invites them inside the house.

Little did she know, however, that one of the kitties she’s been caring for over the past couple of months isn’t a cat at all.

Recently, Eric decided to stop by his grandma’s house for a visit. As he walked in, she was there to greet him, along with the typical array of strays who can usually be found lounging there. But then Eric’s eyes landed upon something unexpected.

Snuggled up among the cats, in a bed all his own, was an opossum.

Alarmed and confused, Eric assumed the wild imposter had just snuck in. His grandma, seemingly surprised by that reaction, sweetly tried to calm Eric’s nerves. That “kitty” in the corner? He’d been coming around for a while now. She’d named him Tete.

“She reassured me it was one of her cats,” Eric told The Dodo. “I told her it wasn’t what she thought it was.”

Now, it was Grandma who was confused.

This all came as a shock to Eric’s grandmother. She needed to see for herself. But her reaction at learning the truth about dear Tete couldn’t have been kinder.

Previous article: These Eye-Opening Photos Will Make You Think Twice Before Swimming In The Ocean
Next Post: Man Finds Grandparents Century-Old Wedding Cake Inside A Hatbox In Garage