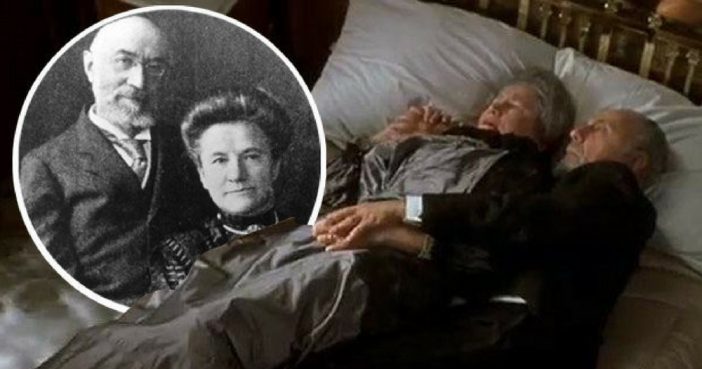 ONE of the most touching stories of the sinking of the Titanic has been revealed – and it was immortalized in a heartbreaking scene in the Hollywood hit.

ONE of the most touching stories of the sinking of the Titanic has Movie fans will remember the tearjerking moment from the film’s climax, where an elderly couple is seen embracing on a bed as the ship sinks.

Water gushes in around them as the husband clutches his wife close as they wait to die.

It was an unforgettable moment in one of the biggest movies all time.

But did you know there is a real story behind the touching scene?

Heartbreakingly, the couple was actually based of Ida and Isidor Straus, who chose to die together when the ship went down on April 15, 1912.been revealed – and it was immortalized in a heartbreaking scene in the Hollywood hit.

Taking the trip of a lifetime on the Titanic maiden voyage, the couple were passengers in first class.

Ida was offered a way off the ship but instead refused to leave her husbands side, reports the New York Post.

While Isidor nobly gave him his space in the lifeboat as he said women and children should be rescued first.

Instead, the couple chose to die together on the doomed ship as it plunged beneath the icy waves in the North Atlantic.

Unlike the heroes Jack and Rose from the film, with Leonardo Dicaprio’s character sacrificing himself so Kate Winslet might live.

Ida is reported to have given her coat to her maid, before saying of Isidor: “As we have lived, so we will die together”.

Eyewitness reports differ from the depiction in the James Cameron film, claiming they did together on the deck rather than in their cabin.

The couple great-grandson Paul Kurzman said: “I often asked my grandmother, ‘Would you make the decision that your mother and father made?’ ” he said.

“She said, ‘Paul, I’m not sure. But I’m not surprised it was the decision of my parents.’ ”

Isidor body was recovered from the sea, but Ida’s body was never found – with up to 6,000 people attending their funeral in New York.

The couple has a shared mausoleum in the Woodlawn Cemetery, with Isidor buried alongside an urn containing water from the sinking.