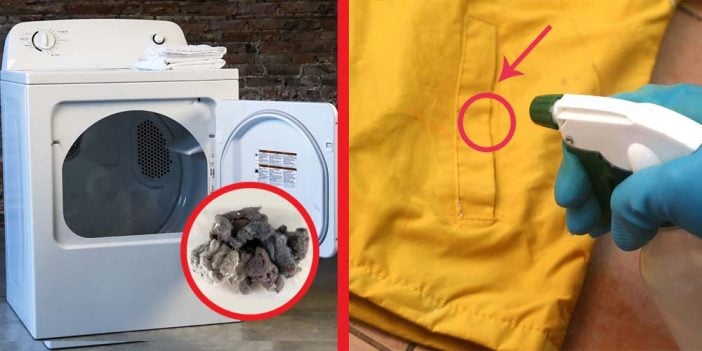 Trust us, it’s worth the extra effort of making sure these things never end up in your next load of laundry.

Nothing is worse than shrunken clothes and a broken washing machine. Fortunately, we know how to un-shrink cotton, cashmere, synthetic fibers, and denim and why those fabrics shrink in the first place. But repairing a damaged washing machine is a whole other story—and a costly one, at that. To save yourself time and money, make sure these things never end up in the wash.

It’s only human to be forgetful sometimes—even if that means forgetting your keys in your pocket when they go through the wash. Well, as anyone with keyless entry or remote starters/unlockers know, water is not our friend. This could cause your keys to shortcircuit, which would bring on a whole other conundrum. But that’s not the worst of it. Just like coins, keys can scratch up the inside of your machine and damage the drum, too. Which, as mentioned before, can be a very expensive fix. According to Peters, “Emptying pockets is the solution.”

If you have a furry friend, there’s a good chance you can vouch for that fact that pet hair seems to show up everywhere. On your jacket? Check. On your rugs? Check. All over your bed? Double check. And the worst part? All that hair can clump together in the washing machine, which can clog its drain pumps and stick to the sides of the wash cylinder, William Bittner, vice president of North American sales at Speed Queen, a company that makes both commercial and residential washers, told Consumer Reports.

It’s happened to all of us. You’re at the grocery store, pay in cash, and get your change back, only to quickly stuff it in your pocket so you don’t hold up the rest of the line. Next thing you know, your washing machine is a tad louder than it should be and all of those coins are going for a swim in the washer. Those little pieces of metal might seem harmless, but they can cause some serious damage to your washing machine. “[Coins] can damage the fins on the drain pump if they make it past the filter,” says James Peters, Kenmore Laundry Product Manager. “Emptying pockets is the solution.” They could also get stuck in a drain pipe and block it so the water doesn’t drain or they might even shatter the glass of a front-loading washer. Or worse, they could damage the drum and puncture the outer tank, which could cost hundreds and hundreds of dollars to fix. In fact, it might even be cheaper to buy a brand new washing machine at that point, according to Daily Mail.

We know, it’s so much easier to just throw your lingerie into the wash with the rest of your clothes. Unfortunately, this could be bad news for both your clothes and your washing machine. Those hooks and wires on and in your lingerie could attach themselves to other clothing or even itself, resulting in rips and tears. This is particularly true for underwired bras. They could also hook onto parts of the washing machine, which could end up damaging the inside of the machine. Instead, opt for handwashing your delicates or buying a lingerie bag to wash them in.

You’re about to run out of gas but you’re in a rush. So once you’re done filling up your tank, you quickly pull out the pump and—whoops, you spilled gas on yourself. It happens. But don’t make the mistake of throwing those pants in the washing machine. You might be eager to get rid of that strong smell, but gasoline doesn’t mix well with your washing machine. It might even result in a fire or an explosion. Not to worry, according to The Spruce, you can get those stubborn stains out by mixing two-parts baking soda and one part water and rubbing the paste into the stain. Another method is hand-washing them “in a sink or bucket with hot water and detergent or dish soap and hang dry,” says Peters.

It might seem easier to stuff as much as you can into your washing machine (especially if you have to pay per wash), but you’re not really doing yourself (or your wallet) any favors. When your washing machine is stuffed to the brim, there’s no wiggle room for your laundry to move around and actually get washed. Not to mention, overstuffing could damage the suspension and bearings of your washing machine. In fact, according to Adkisson, “Overloading is one of the top causes of washer and dryer issues that Sears Home Services technicians encounter.”(Want to boost your detergent without the risk of damaging your laundry and washing machine?