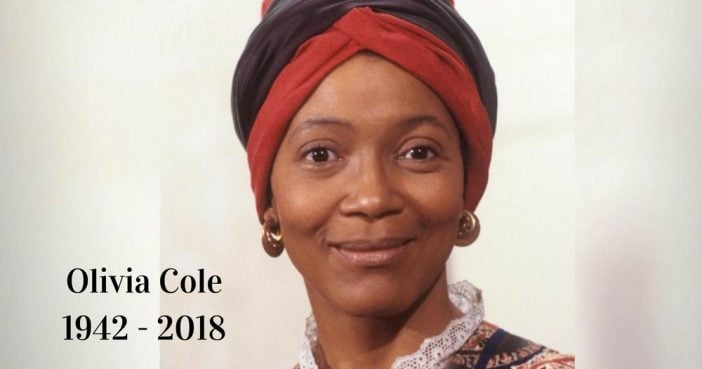 Known for her role in Roots and the miniseries Backstairs at the White House, Olivia Cole died at her home in San Miguel Allende, Mexico on January 19, Deadline has confirmed. She was 75.

Susie Schwarz from SBD Partners, where Cole had been for over 35 years, told Deadline that, as far as they knew, she had not been ill. The New York Times said she died of a heart attack.

Cole was born in Memphis Tennessee on  November 26, 1942. She attended Hunter College High School, Bard College in New York and then the Royal Academy of Dramatic Art in London.

She starred opposite Ben Vereen’s Chicken George as his wife Mathilda groundbreaking ABC 1977 miniseries Roots based on Alex Haley’s novel. The miniseries won her an Emmy for Outstanding Single Performance by a Supporting Actress in a Comedy or Drama Series. She also received an Emmy nomination for her role in the aforementioned Backstairs at the White House, where she appeared as Maggie Rogers, the mother of Leslie Uggams’ Lillian Rogers Parks. The characters were real-life women who worked as maids in the White House for decades.

Cole also starred opposite Oprah Winfrey in the 1989 ABC miniseries The Women of Brewster Place and on the short-lived series that followed. Her other TV and film credits include Coming Home, Some Kind of Hero with Richard Pryor, Go Tell It on the Mountain, First Sunday, Guiding Light, L.A. Law, Szysznyk, and Murder, She Wrote.

On the stage, she appeared in Romeo and Juliet at the American Shakespeare Theatre in Stratford, Connecticut in 1964. Two years later she made her Broadway debut  The School for Scandal. In 2016, she starred in the play Having Our Say at the Long Wharf Theatre and at Hartford Stage.

Cole was married to actor Richard Venture who died in December. The two met while starring in a play at the Arena Stage in Washington. They divorced after 1982 and she lived in Mexico for nearly 30 years.

Previous article: Can You Identify All 10 Beatles Songs by Using these Visual Clues?
Next Post: Can You Ace This Grammar Quiz?