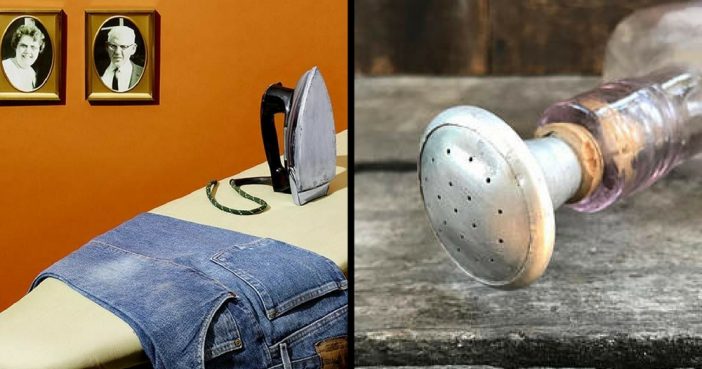 The author’s grandmother wanted the world  to see her husband not as an aging farmer with false teeth but exactly as she did.

Even though my grandfather, whom I called Papaw, was a farmer, my mamaw would iron his work clothes every day. Mamaw mixed up her own starch in a glass Coke bottle topped with a metal cap that had a multitude of holes in it, like a salt shaker. She would sprinkle Papaw’s pants with the starch, hang them over a chair for a few minutes so they could dry a bit, and then apply the heat of the iron to them.

Because I watched her do this through my childhood, I ­figured every old woman in the world did it. But as the years passed, I began to question this practice. Why in the world did Papaw need his work clothes ironed? Most days, he never saw anyone but me and maybe a few other crusty farmers.

Mamaw never ironed my clothes, and I sure didn’t see any use in doing it for myself. Heck, my clothes were usually so dirty by 9 a.m. that any sign of ironing would be long gone.

One day when I was about 13, I asked Mamaw about it.  I wanted to know why she thought it necessary to invest time and effort to press clothes that were rarely seen and would  be filthy in just a short time.

Her reply was as sweet a sentiment as I have ever heard.

She told me that Papaw was the most handsome man in  the world. She said he was her best friend and the love of  her life. She loved every chance she got to show him off and make the rest of the world jealous that he was hers.

She went on to say, “You just  never know when Papaw might run into someone, and I want him to look the part of the most handsome man God ever made.”

Later that day, I looked closely  at Papaw. He sure didn’t look all that handsome to me. He was a short, skinny man with a relatively big fanny compared with his shoulders. His hair was thin on top, and  his false teeth didn’t line up too good when he smiled. He wore horn-rimmed glasses that were much too big for his face because  all he cared about was being able  to see. I really didn’t see how  anyone could consider this man  the most handsome one God ever made.

So I asked Mamaw about it again a few days later. I informed her that I had closely observed ol’ Elmo Brown and most certainly didn’t see him as the most handsome man on earth.

She giggled and gave me a girlish smile, the kind you don’t expect grandmothers to be able to express at their age.

“You just aren’t looking in the right light, Turdhead [my grandparents’ fond nickname for me]. He is the most beautiful man God  ever made. Those eye wrinkles haven’t ­always been there. I remember when he had real teeth. He has the most beautiful blue eyes I have ever seen. They are exactly the same color as the sky just before the sun goes down. His entire face lights up when he smiles, and his voice is so calming and full that every­one in nine counties wants to hear him talk.”

Say what? My papaw had always been an old man as far as I was concerned. Was Mamaw actually wanting me to consider that Papaw used to  be young? Ha ha ha, no way!

I heard what she said and was kinda grossed out. I decided to forget  I had ever asked. How could this old woman think that an old man with false teeth was beautiful? Sheesh, I thought. Old people.

The years went on, and I watched Mamaw and Papaw grow old together. I was probably 30 when it dawned on me what beauty really was—it was Mamaw ironing Papaw’s pants with starch from a Coke bottle.

If you have a similar grandma story you want to share, we would love to hear it!

Previous article: Can You Guess What this Weird Vintage Object Was Used for?
Next Post: These 20 Photos Of Fans And Celebrities Together Are Unbelievably Awkward