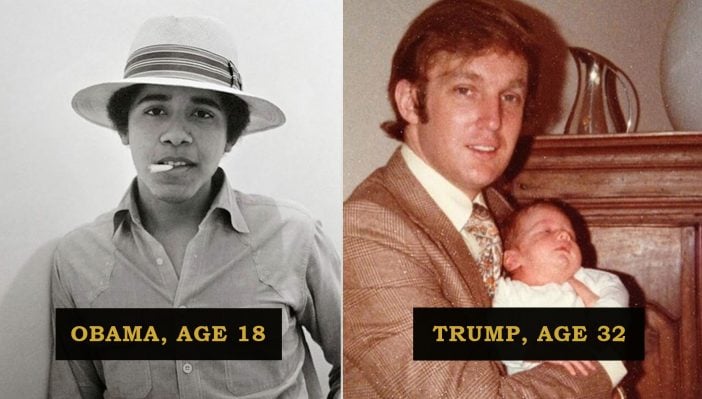 Most of us are familiar with the faces of those who have held the office of President of the United States. Though noble and powerful, almost all of those faces have one thing in common: they’re old (not to mention male and white).

Considering that the youngest person to assume the presidency was Theodore Roosevelt at the age of 42, it’s no wonder that most of the photographs and portraits of past US Presidents lack a certain youthful glimmer. But the following 10 photos of US presidents as young men will give you a whole new perspective…

This isn’t really a surprise, but Obama was very cute in college, and the first future president to rock a mini-‘fro (though it would have been such a good look on Grover Cleveland. Missed opportunity, Grove).

John F. Kennedy is generally regarded as the hottest president, so it’s no surprise that in his 20s he was heart-stoppingly gorgeous.

Gerald Ford, also known as a pretty boring president, played football for the University of Michigan in the early 1930s and looked foxy doing it. He could tackle me any day with those touchdown looks. Extra point for those strong arms. Automatic first down for that thick hair. I’d let him sack me for sure. Ball control.

Aww, Clinton’s adorable. No wonder he’s so irresistible to the ladies.

Decades before he asked Gorbachev to tear down the Berlin Wall, Reagan was a movie star and apparently a lifeguard. Check out that swimsuit with those interesting midriff cutouts. Who knew he was so fashionable?

Not only was Franklin Delano Roosevelt instrumental in ending World War II (you know, that big serious one), but when he was in college he could have been in an L.L. Bean ad.

Growing up on a peanut farm meant Jimmy Carter would develop a deep bond with rural environments, which would also spell opportunity. By age 13, in the midst of the Great Depression, Carter had earned enough money on the farm to buy five low-priced houses to be rented out to local families.

H.W., also known as Dad Bush, played first base for Yale and scored a total home run with that square jaw and those dark eyes. Anyone sick of these sports puns yet? Not me!

Like his father, George W. Bush went to Phillips Academy in Andover where he struggled academically and got a zero for his first written assignment (Bush had overused a thesaurus that he thought would improve his vocabulary).

Harry Truman spent much of his youth reading and playing piano, and even considered pursuing a career as a concert pianist. He also dreamed of being a soldier, but his poor vision prevented him from getting into West Point. After failing the initial eyesight test required to enter the National Guard, Truman memorized the eye chart and was accepted the second time around.

Previous article: Macaulay Culkin Cleaned Himself Up, Wait Till You See What He Looks Like Now!
Next Post: Can You Exit The Maze Through Alternating Color Circles?