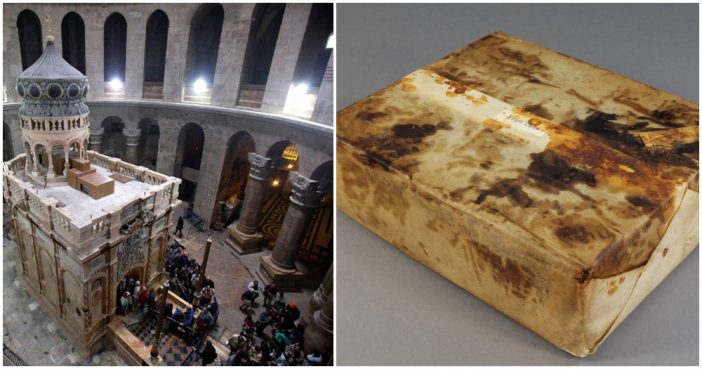 Amazing discoveries came to light nearly every single month in 2017. Take a chronological journey back through 15 of the year’s most intriguing historical events, from archaeological finds and fascinating DNA evidence to newly uncovered documents that change our understanding of history.

In February of 2017, researchers in Israel announced they had discovered jars, wrappings, ties and other artifacts relating to the Dead Sea Scrolls—the famous cache of manuscripts that includes the oldest known copies of Biblical texts—in a previously unidentified cave at Qumran in the West Bank. First discovered back in 1947 after looters had helped themselves to many of the ancient manuscripts, the Dead Sea scrolls were thought to be hidden in 11 caves; this one is the 12th, and the first to be discovered in 60 years.

2. The church containing Jesus’ tomb reopened to the public

In the summer of 2016, officials at the Church of the Holy Sepulcher in Jerusalem’s Old City—where it is believed that Jesus’ body was laid after his death but before his resurrection—finally agreed to let a team of experts begin the first renovation and restoration of the church since 1810. The Holy Sepulcher has been a Christian pilgrimage site since its construction in the fourth century A.D. In March of 2017, it reopened to the public after the $3 million restorations, welcoming thousands of pilgrims and clergy members within its ornate walls.

Dubbed “Australia’s own Jurassic Park,” a stretch of some 15 miles of the Daimler Peninsula in Australia’s Kimberley region is home to the world’s most diverse array of fossilized dinosaur tracks. Among the tracks left by 21 different kinds of dinosaurs in the once-wet sands of a river delta some 130 million years ago, scientists found one sauropod footprint measuring nearly 5 feet 9 inches (1.7 meters). The find announced in March 2017, is the largest dinosaur print ever discovered.

4. A long-lost copy of the Declaration of Independence was found with differently ordered signatures

In April 2017, two Harvard University scholars made the case that a recently uncovered parchment copy of the Declaration of Independence contained an intriguing difference. The 56 signatures at the end are not grouped by state, as in other known versions of the famous document. Instead, they appear all mixed together, using a common 18th-century cipher. The man who likely commissioned the document was an outspoken supporter of a strong national government and identity, and might have been trying to emphasize the signers of the Declaration as a united group, rather than as representatives of separate states.

5. Research confirmed a band of convict pirates sailed to Japan at the height of its isolation

When a band of Australian convicts who mutinied aboard the brig Cyprus in 1829 went on trial for piracy, they claimed they had made it all the way to Japan aboard the captured ship. But as no Japanese records surfaced of the incident, it was long believed to be a myth—until May 2017, when a Japan-based history buff and English teacher translated samurai accounts from feudal Japan of an encounter with Western visitors in 1830. Based partly on a watercolor sketch of a ship with a British flag, he connected the accounts to Cyprus for the first time, effectively solving a 187-year-old mystery.

In June 2017, a team of scientists announced that fossils found in a cave in Jebel Irhoud, a hill in western Morocco, are from “early anatomically modern humans,” and date to around 300,000 years ago. If correct, their findings would make the Jebel Irhoud fossils the oldest known Homo sapiens bones, predating ones found in Ethiopia by more than 100,000 years. The new study goes against the argument that there was a single “cradle of mankind,” instead suggesting that modern humans may have evolved in various locations across the African continent.

For a long time, no one recognized the significance of the small room in the South Wing of Monticello, Thomas Jefferson’s historic Virginia mansion. But after following an old account mentioning that Sally Hemings, the slave woman with whom historians believe Jefferson had a long relationship (including six children together), lived in the South Wing, archaeologists announced in July that the room did, in fact, belong to Hemings. Though the room was adjacent to Jefferson’s own bedroom, it had no windows and was likely damp and uncomfortable. Now, Hemings’ quarters are being restored as part of a larger effort to integrate the stories of Monticello’s enslaved population into the historic site.

According to the Bible, the Israelites conquered Canaan (as the land now encompassing Lebanon, Jordan and Syria were then known) after their flight from Egypt, and destroyed many of its local communities. But in July 2017, when scientists announced their analysis of DNA extracted from five 3,700-year-old Canaanite skeletons unearthed in Sidon, Lebanon, they found they shared about 90 percent of their DNA with modern Lebanese people. This suggests different groups within the Levant shared a common genetic background—a significant finding in a region long torn apart by religious, political and cultural struggles.