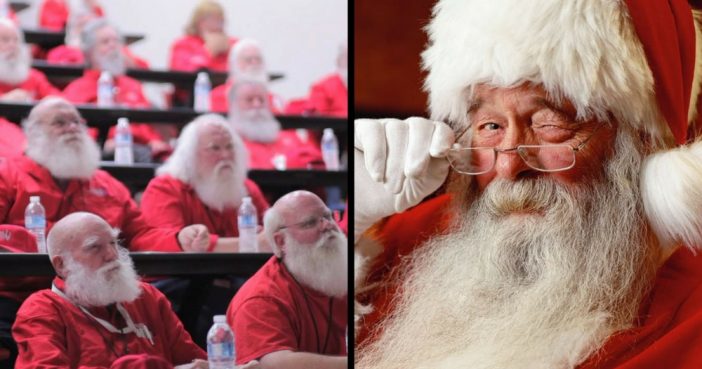 Being a mall Santa might seem like a relatively easy job: Put a kid on your lap, ask them what they want for Christmas, pose for a quick photo, and send them on their merry way. But any Santa who’s done even one season at the mall will tell you the job takes dedication.

“There’s no harder job in all of Christmas than being the mall Santa,” says Paul Sheehan, who worked as a Santa at a mall in rural New Hampshire and is now in his 36th season as a professional Mr. Claus. “Between Black Friday and Christmas Eve at 3 pm, I had seen over 17,000 kids. Someone in a bigger city, they’re doing twice and three times that.”

But there’s a reason thousands of rotund, bearded men don the suit every year: While demanding, being Santa is also incredibly rewarding. We spoke with a few professional Kris Kringles about what it’s like being the season’s biggest celebrity.

1. THEY GO TO SANTA COLLEGE.

If you’ve ever perched on Santa’s knee at your local mall, there’s a good chance he was a graduate of Santa University, run by Noerr Programs Corporation, an events company that trains and distributes Santas to more than 278 major malls and shopping centers across the country. Each Noerr Santa has to pass a background check and undergo several rounds of interviews. And a real beard is required. “That’s part of the magic,” says Ruth Rosenquist, Noerr’s Director of PR.

Every August, Noerr hosts its Santa University in Arvada, Colorado, where hundreds of “gentlemen of great mirth and girth” gather for four days of training on everything from Santa ethics to how to ho-ho-ho. “It’s amazing to sit with all these guys in their red shirts and suspenders,” Rosenquist says. “You look up and you’re speaking to Santa. It’s the best audience in the world.” Watch a sneak peek below:

If you’re wearing the red suit, you must behave like Santa at all times. This means having a jolly temperament and never snapping or yelling at a child, no matter how frustrated you may be.

“The most important thing they need to understand is that they are Santa and they always are to remain in character of Santa,” says Rosenquist. “They’re never to break that character.”

For some of the more professional St. Nicks, the white beard and big belly stays with them all year, so they have to be careful about how they’re representing the jolly old elf in public. This means being on one’s best behavior and fielding questions like, “Santa, what are you doing at the grocery store?”

Robert Hildreth, a professional Santa of 30 years, says he doesn’t drink when he goes out for dinner with his wife Carol Hildreth (a.k.a. Mrs. Claus) because he wants to be the model image of Santa for children. “You gotta watch what you say and do because the kids are looking at you,” he says.

But playing a convincing Santa all year round comes with its perks, like the occasional free meal. “We’ve had a couple incidents where we’ve gone into restaurants and the little ones notice us,” Carol explains. “He’ll go over and talk to them a bit and then when we go to pay the bill it’s already been taken care of.”

3. THEY KNOW WHERE THE MALL’S SECRET BATHROOMS ARE.

“I refuse to go to the public restroom if it’s at all avoidable,” says RG Holland, one of Noerr’s men in red. “The whole deal of being Santa, particularly at the mall, is when you’re dressed as Santa you have to stay in character and it’s kinda hard to be in a Santa suit staying in character in front of a urinal.”

In some malls, Santas have their own designated dressing area complete with a bathroom. And if not, they improvise. “I find the restroom in the mall that is the most obscure and private,” Holland says. “If I have trouble finding those, I find the nearest department store and use one of their restrooms that’s out of the way.”

If a Santa needs to take a lunch break or his shift is ending, sometimes another one will step in without anyone noticing. “In the busiest of malls, we often set it up so there are two Santas and we try to match in terms of physical appearance so it’s not that obvious in mid-day when we swap,” says Holland. “We don’t want anyone saying ‘That’s not Santa!’ A lot of times even parents and especially kids, if they didn’t see us together, they wouldn’t know which was which.”

5. THEY GET A BODYGUARD.

According to Rosenquist, every Noerr Santa gets an escort when he leaves the set. This is supposed to discourage the mobs of fans from attacking him.

6. THERE’S A RIGHT WAY AND A WRONG WAY TO BLEACH A BEARD.

While some naturally-bearded Santas are blessed with snowy white bristles, others aren’t so lucky. In that case, bleaching is the best option, but only when it’s done gradually and with great care. “It’s gotta be done in stages,” says Rosenquist. “If you try to go snowy white all at once, you’ll burn your hair and it gets yellow.” Smart Santas begin the coloring process in October in preparation for the holiday season.

Noerr doesn’t disclose how much it pays its actors, but according to Rosenquist, it’s a salaried position, and the rate can vary by location. Ed Warchol, president of Cherry Hill Photo, another Santa distributor, says his Santas earn “well into the five-figure range for just six weeks of work.”

Page Page 1 of 3
Previous article: What’s the Answer to this SIMPLE Math Problem?
Next Post: Can You Beat The 2 Minute Average Time It Takes To Find The Robin Hiding In This Puzzle.