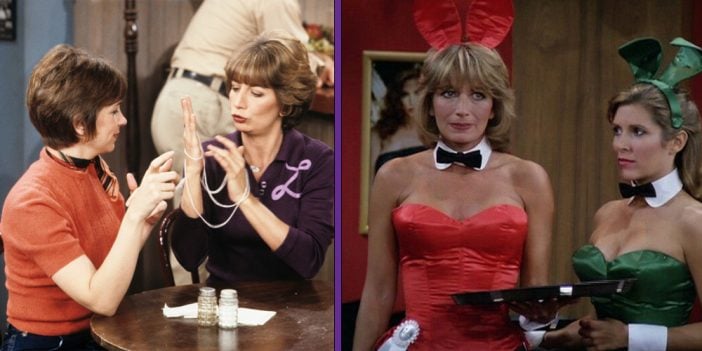 Laverne & Shirley was one of the rare spin-offs that eventually surpassed its parent series (Happy Days) in the ratings. Despite its popularity, there was a lot of unhappiness behind the scenes, due mainly to the sudden success of the show. Luckily time has healed most of those old wounds and the cast members are all on friendly terms today. We spoke with series co-creator Mark Rothman, who helped us uncover some things you might not know about the beloved sitcom. (Mental Floss)

1. THE GENESIS OF THE SHOW DATES BACK TO AN UNUSED SCRIPT FOR ANOTHER SITCOM

Paul Sand in Friends & Lovers was a short-lived sitcom that ran from September 1974 to January 1975. Sand played Robert Dreyfuss, a nebbishy musician with the Boston Symphony, and Penny Marshall played his sister-in-law, Janice. Mark Rothman and Lowell Ganz wrote an episode for the show that featured Robert, who is somewhat shy and awkward, trying to pick up women in a supermarket. The script was ultimately not used because the producers felt it made the title character appear to be a little too much of a loser.

2. THE UNPRODUCED SCRIPT WAS REPURPOSED FOR AN EPISODE OF HAPPY DAYS.

After the Paul Sand show was canceled, Garry Marshall’s mother began to pester him about his sister being out of work, and couldn’t he help her out somehow? Rothman and Ganz were writing for Happy Days at the time, and Marshall brought up the idea of incorporating parts of the Friends & Lovers script into a Happy Days episode. The result was “A Date with Fonzie,” in which the Fonz summons two “loose” girls from his little black book to go on a double-date with him and Richie (who was in a dating slump).

The two girls, played by Penny Marshall and Cindy Williams (who had co-starred with Ron Howard in American Graffiti two years earlier) were christened “Laverne DeFazio” and “Shirley Feeney” and were an immediate hit with the studio audience.

Page Page 1 of 5
Previous article: 10 Valuable Coins That Might Be In Your Pocket
Next Post: BREAKING NEWS: Equifax Confirmed Hackers Accessed Up To 143 Million US Social Security Numbers