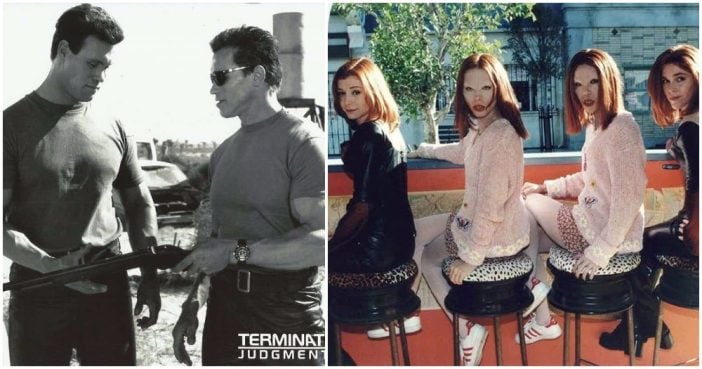 7. Karen Gillan in Jumanji: Welcome to the Jungle

Karen Gillan is relatively new to the game. Having only been active and popular throughout Hollywood in the past seven years or so since her role in Doctor Who as Amy Pond, she’s still seeming to struggle with finding her niche in the industry. She’s gone from nerdy sci-fi to quirky action movie (Guardians of the Galaxy) to spine-tingling horror (Oculus) to a more-than-likely awful comedic romp (the upcoming Jumanji sequel, Welcome to the Jungle). In her latest flick, she’ll be playing a crop-top wearing adventurer tromping through the jungle with Dwayne Johnson, Kevin Hart, and Jack Black. With leaders like those, you know her character will get in trouble and she’ll need some stunt doubles. Here, she’s pictured with both her stunt double (who is standing on the right side) and her stand in, Emily (on the left). While we can’t say we have high expectations for the film, we’re certainly excited to see these ladies strut their stuff.

If you saw Ant-Man, you know that most of the movie is about Michael Douglas being a bit too old to be doing stunt work anymore. The plot of the movie includes key points such as Hank Pym (Douglas’s character) being the originator of the Ant-Man suit, but he’s a bit too old and out of the game to be running around playing superhero, so he recruits convicted criminal Scott Lang to take over the suit for him and save the day. So why did Michael need a stunt man at all? Mike Runyard (who has doubled for Sean Connery, Harrison Ford, and Christopher Walken) got to fill in for Michael as Hank Pym on rare occasions, but it was always in front of blue screens when other effects were being added in (for example, the flashback scenes with Wasp). The two are actually great friends and golfing buddies in real life!

Look. Bruce Willis is known primarily as a star of action films. When you think of his name, movies like Die Hard, G.I. Joe, and The Fifth Element spring to mind. But why is Bruce known for these movies? We’re not entirely sure. He’s not exactly in great shape, he’s actually kind of overweight, and he’s not such an amazing actor that we’re dying to watch his performances. Don’t get us wrong; we love Bruce! Who doesn’t love Bruce!? But his niche in the industry is kind of odd, especially given that he’s not the stereotype he portrays. That means that every time he’s in an action film, he’s got stunt doubles galore surrounding him. So on each and every one of his movie sets, there are a bunch of bald guys running around with smug smiles on their faces and giant glasses covering their eyes! How confusing must that be?!

Page 3 of 4
Previous article: Can You Name this Handsome Football Player?
Next Post: Danny Bonaduce On ‘Partridge Family’ Pal David Cassidy: “He Never Did Get The Life He Wanted”