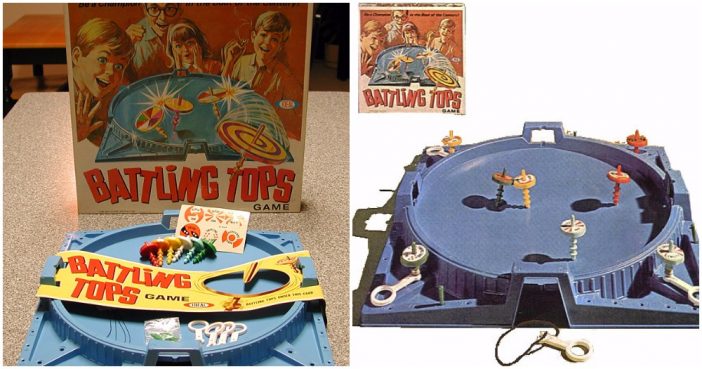 Assuming you didn’t have access to cockfights and bare-knuckle boxing bouts as a kid, the next best thing to getting your gladiatorial fix was Battle Tops. Once you released your spinning top into the plastic arena, you could sit back and watch the carnage erupt as you cheered on your fearless plastic cohort and hoped that, once the dust cleared, it emerged the last one standing, er, spinning.

Battling Tops, released by Ideal toys in 1968, came with six spinning warriors who, despite their innocuous-sounding names (Dizzy Dan, Tricky Nicky, Twirling Tim, etc.), were all eager to enter the provided plastic arena.

Only four could battle at a time, since there were only a quartet of launching stations, one on each side of the arena. A cord with a finger ring at the end was attached to each top – give it a good yank and let the fighting begin.

The goal was simple – don’t get knocked down and don’t get knocked out. Players watched anxiously as their tops smashed into each other with reckless abandon, trying to topple the competition and emerge victorious. Players battled through ten dizzying rounds to determine the winner.

One of the things that made Battling Tops so popular was that any age could play. Sure, the smallest warriors might need a helping hand from an older sibling or parent to wind up their top, but once the competition started, age mattered little. All eyes, young and old, were locked on the hypnotic twirling patterns, hoping their top had the intestinal fortitude to withstand the melee and remain upright.

The game was redesigned in the late 70s, thanks to the popularity of a little film called Star Wars. Now called Battling Spaceships, and featuring a space-themed galactic arena, the concept remained the same. In the 80s, Marx bought the rights to the game, but it was eventually discontinued before the decade’s end.

Thankfully, Mattel has brought back Battling Tops in recent years so that new generations of gladiators can experience the fierce competition of this classic game that pitted families against each other, without anyone having to tape up their knuckles.