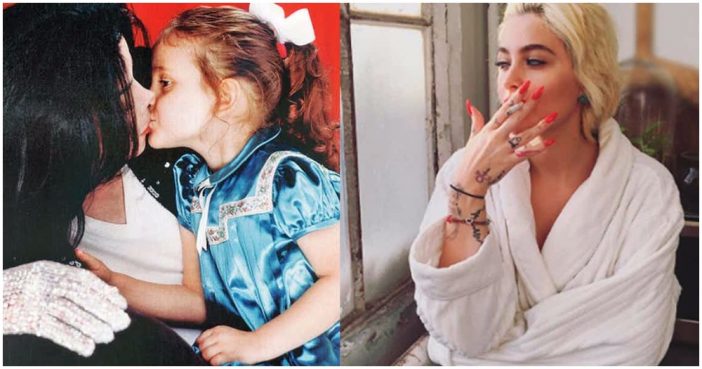 In the world of the rich and famous, there are definitely advantages and disadvantages to being in the limelight. While there are those who hone their craft and pursue their dreams in order to become a household name, there are others who are simply thrust into the spotlight because of their famous family members. In the case of Paris Jackson, the world may never know whether or not she would’ve ever been thrust into the spotlight because of how fiercely her anonymity was protected by her father, Michael Jackson. The King of Pop went to great lengths to keep his children hidden from the media and even went so far as to put masks and coverings over their faces when they were out in public. It wasn’t until after his passing that the public even got to see his children’s faces without all of their disguises, and they were pleasantly surprised.

Paris was already strikingly beautiful as a child, and the public was eager to watch her grow up in front of their eyes. Like any other celebrity child (or adolescent girl, for that matter), Paris went through a myriad of different looks on her way to adulthood. Just when the public felt that they could finally put her in a neat little peg, she would change things up again and kept people talking. Her journey may not be over yet, but let’s take a look at the 15 photos showing the evolution of Paris Jackson over the years.

While Paris Jackson was shedding her persona as Michael Jackson’s grief-stricken daughter, she went through a number of different phases. She expressed herself through changing up her hair and style, but she didn’t stop there. Like so many others, Paris fell into the tattoo trend in a big way. She showed off some of her new tattoos online, and they were actually quite tastefully done. It wasn’t like she was getting full-sleeve tattoos, so people really didn’t get up in arms over a beautiful flower or two. It seemed like she was finally starting to come into her own and was able to let go of some of the depressed behavior she had exhibited in the past. While not everyone might agree on her new obsession with tattoos, at least she finally looked happy.

2. Covered By A Mask

When Michael Jackson was still alive, he went to great lengths to try and protect the identity of his children. He knew all too well how detrimental the paparazzi could be for someone of such a young age, and he didn’t want those same issues with his own children. He covered their faces with masks and blankets, and the paparazzi were never really able to get footage of the Jackson kids while they were out and about. While it may have seemed strange to outsiders, Paris explained how it affected her later on in life. She said that covering her face while she was out with her family was a great way to give her anonymity when she wasn’t with her famous father. She said that she only had to wear the mask when she was with Michael, but it allowed her to have a normal childhood because the paparazzi didn’t photograph her when he wasn’t around.

Just because Paris Jackson looked amazing during her Rolling Stone magazine cover didn’t mean that she was constantly going to walk around in skin-tight ensembles and full makeup. Part of evolving into her own person was realizing what her own personal style would be like. This particular look was shot while she was out and about and really showed off a carefree look that was unlike some of her other photos. The cropped jeans seemed far more casual than sexy, and the layered top made it seem like something that was Bohemian chic rather than designer couture. She completed the ensemble with some accessories that looked straight out of the 1970s, but she managed to make it look great. No one really had anything bad to say about this look since her youth allowed her to get away with this casual look.

Page Page 1 of 5
Previous article: Willie Nelson Cuts Short Concert Due To Breathing Problems
Next Post: Can You Name These Vintage Gadgets?