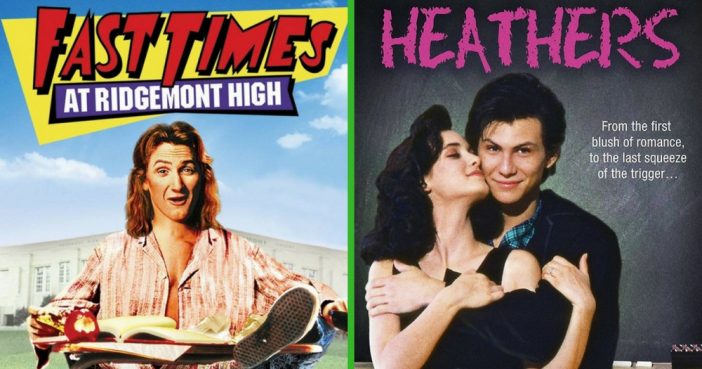 No matter your age, there’s always one high school movie that sticks out as a pivotal moment in movie viewing pleasure. High school movies reach cult status for various reasons, but beyond the coming-of-age story that they tell, they can relate to multiple facets of one’s life or can act as a nostalgic picture that reminds us just how much you grow up after those four defining years.

There aren’t many high school movies that are being nominated for Academy Awards(though there are some) but that doesn’t mean their importance to us is unheard. Whether it be funny one-liners that catch our attention, a stellar acting performance that paves the way to further success, or just a relatable storyline that we can continually connect with, high school movies are some of the best examples of films that stand the test of time. Here’s our list of our favorite top high school movies of all time. These are the movies that we can always go back to and thankfully recall that those four years eventually do come to an end.

While many of the best high school movies stick to the comedy genre, Dead Poets Society makes this list as the only true drama, but still a strong look into high school life nonetheless. We all wish we had as inspiring of a teacher as Robin Williams’ John Keating, but alas, we all can’t go to a fancy prep school like Welton Academy. Though the high school this film is set in may be far from typical, the students still fall into similar personality types as seen in many of the best high school movies.
Dead Poets Society gave us a group of high school students that many could relate to. Each one was finding themselves, and especially in the constructs of a private school setting, it was a difficult feat. Though the story takes a dark turn, it was a high school movie with a deeper meaning, teaching us to follow your dreams and feel inspired. Unfortunately, like most high school movies, the young protagonists don’t come into their own until the final few scenes of the film, in this case costing the career of one person who helped them the most.

Even though the majority of Dazed and Confused doesn’t happen on high school grounds, it does capture the essence of high school life quite well. The 1993 Richard Linklater film that not only saw the start of some of the biggest names today from Matthew McConaughey to Ben Affleck rose to cult film status later in its life, but can still be recognized as one of the best high school movies of all time. Exploring both sides of the spectrum in a high school setting, the outgoing senior class and the incoming freshman class, Dazed and Confused gave us a peek into what it means to move forward and the trials and tribulations that come along with change. Including a pivotal keg party, as well as sharing many characters first times exposed to alcohol and marijuana, it explored risky behavior and difficult choices, but along the way a whole lotta love and friendship. With many different types of characters, and terrific acting to boot, Dazed and Confused showed us just how fun high school can be, but also how important it was to help us grow up.

While we can’t claim most high school movies entirely realistic, Heathers falls far from the bunch. The dark comedy, massive killings and overall tragic tone drives the plot of the film, but it still gives us a decent look into a realistic essence of high school. Winona Ryder’s Veronica Sawyer was placed into the popular group that everyone desired. But in realizing just how evil the girls where, their nature rubs off on her, and accidentally ignites a mass killing spree. Though her character’s actions are brought to the extreme, the situations that bring out those actions are far too regular in a high school setting. Add a bad influence seen in Christian Slater’s J.D. and it’s a lethal mix. Though many of the deaths in the film are not quite suicides, the implications behind them are real situations that can cause teen depression. The film itself was a commercial failure, but later reached cult status, as well. And the creative take on a high school setting is enough to sit Heathers comfortably on this list.

Admit it, you knew this one was coming. Fast Times at Ridgemont High is one of the more successful high films in capturing many different aspects of high school life. With an ensemble cast that ranges in age and character type, the movie successfully captured what it meant to be a high school student from different angles. The two subplots chronicle a full school year in the lives of the students. In exploring multiple worlds, the film dives into part-time employment, losing one’s virginity, break ups, teen pregnancy, and high school deadbeats. What makes the movie stick out even more is how it shows the distinction between different years of high school, and how the older students see themselves in comparison to their younger counterparts. But not only is it successful in humorously engaging teen promiscuity and the discomfort that follows, but it also has an equally hilarious subplot between Sean Penn’s Jeff Spicoli, a carefree stoner, and his uptight history teacher, Ray Walston’s Mr. Hand. The dual story lines allow the movie to encapsulate all different situations and realizations that come from living high school life.

Ferris Bueller himself spends no time on high school grounds during the adventure that is Ferris Bueller’s Day Off. But along with the school’s reaction to his absence, as well as the eventful day Bueller spends with his friends, the film perfectly dives into what it means to be a high school student. On the ultimate ‘sick day’ Ferris, his girlfriend Sloane and best friend Cameron go on the most epic of adventures showing off the excitement that goes along with skipping school for the day. By the end though, we learn an eventful day can lead to an unwanted final outcome.
As a film, Ferris Bueller’s Day Off is one of the best, and the only reason it doesn’t rank higher on this list is because of the main character’s lack of time spent in actual high school. We do get to explore many of the teen tropes though, including a bitter older sister, an annoyed teacher seeking to catch Ferris in the act, and the deeply profound friendship between three misfits.

Page Page 1 of 5
Previous article: Use the Images to Reveal the Name of the 1960’s Song
Next Post: Map Shows The Animal Most Likely To Kill You in Each State