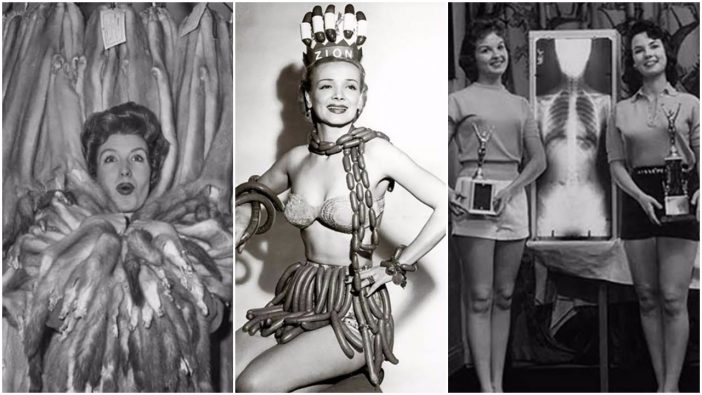 One of my favorite scenes from The Golden Girls involves Betty White’s character, Rose, lamenting how she never won the coveted title of “Butter Queen” when she was a teen in her fictional Midwestern hometown of St. Olaf.

The description of the beauty pageant sounds ridiculous. It involved a trivia section with a trick question about margarine and a churning competition — and inevitable churning scandal.

Although this particular beauty contest never actually existed, during the 1950s and ’60s, the world of pageantry boasted plenty of strange beauty competitions in which local ladies brimming with old Hollywood glamour vied for the title of their hometown’s highest honor.

Yet, an offbeat beauty pageant wasn’t just a small-town thing during this era. There were also businesses, like the Zion Meat Company, and even government agencies, like the National Security Agency, that rated women willing to compete on their beauty, poise, and that certain je ne sais quoi that paired perfectly with something as random as potatoes…

1. This woman was crowned ‘Sausage Queen’ in a 1955 beauty contest sponsored by the Zion Meat Company during National Hot Dog Week!

2. Gail Hooper was photographed holding a 56-pound catfish when she was 18, after she was crowned Miss National Catfish Queen in 1954.

3. These lovely ladies competed for Miss Correct Posture in 1956.

Page Page 1 of 5
Previous article: Essential Albums To Add To Your Record Collection
Next Post: $1,700,000.00 Penny! We’ll Show You How To Check If You Have One