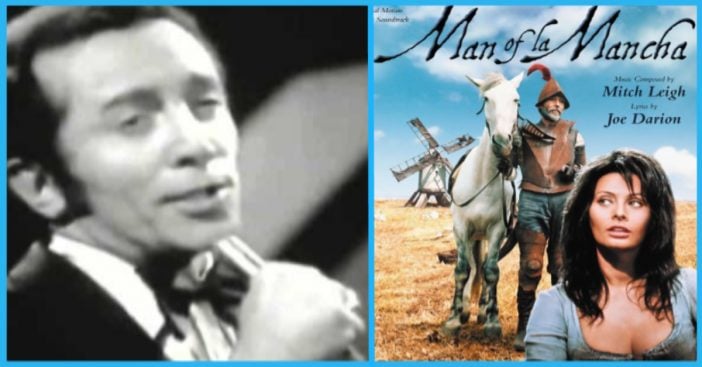 “The Impossible Dream (The Quest)” is a popular song composed by Mitch Leigh, with lyrics written by Joe Darion.

The principal song, “The Impossible Dream” became a musical theater standard. The musical has played in many other countries around the world!

“The Impossible Dream (The Quest)”

The song is the most popular song from the 1965 Broadway musical Man of La Mancha and is also featured in the 1972 film of the same name starring Peter O’Toole.

The song is sung all the way through once in the musical by Don Quixote as he stands vigil over his armor, in response to Aldonza (Dulcinea)’s question about what he means by “following the quest”.

It is reprised partially three more times – the last by prisoners in a dungeon as Miguel de Cervantes and his manservant mount the drawbridge-like prison staircase to face trial by the Spanish Inquisition.

The Contemporary Classics Award placed the song in the Songwriters Hall of Fame.

How about Robert Goulet singing this powerful song..