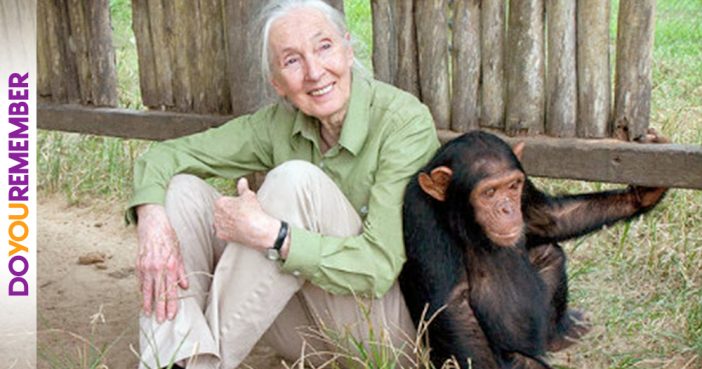 If you had a dream job, what would it be? Mine would be to help animals and one of my true idols is Dr. Jane Goodall. In my eyes, She is one of the most influential and heartless woman in the world of animals. And her inspirational stories are absolutely incredible to watch and listen to.

Dame Jane Morris Goodall – April 3, 1934 (born Valerie Jane Morris-Goodall, formerly Baroness Jane van Lawick-Goodall, is a British primatologist, ethologist, anthropologist, and UN Messenger of Peace. Considered to be the world’s foremost expert on chimpanzees, Goodall is best known for her 55-year study of social and family interactions of wild chimpanzees in Gombe Stream National Park, Tanzania. She is the founder of the Jane Goodall Institute and the Roots & Shoots program, and she has worked extensively on conservation and animal welfare issues. She has served on the board of the Nonhuman Rights Project since its founding in 1996.

Jane Goodall is known for teaching the world about Gombe chimpanzees. She’s been working with them for over fifty years now, and is still a huge inspiration to women primatologists. She is an extraordinary woman who deserves to be celebrated!

In July 1960, she moved to Tanzania near Lake Tanganyika and formed a small research station at Gombe Stream National Park. Her station is only accessible by boat. In October 1960, she witnessed chimpanzees making and using tools. Up until that point, using tools has only been known as a human characteristic. Then she saw the chimps hunting mammals, similar to how humans hunt. Goodall realized the undeniable link between humans and chimpanzees.

Goodall claims at the time “it was not permissible, at least not in ethological circles, to talk about an animal’s mind. Only humans had minds. Nor was it quite proper to talk about animal personality. Of course everyone knew that they did have their own unique characters — everyone who had ever owned a dog or other pet was aware of that. But ethologists, striving to make theirs a “hard” science, shied away from the task of trying to explain such things objectively.”

Goodall had seen chimpanzees go through acts of compassion, which was largely considered a human trait, during her time at Gombe. She discovered that not only do chimpanzees share similar traits to humans, they also share similar personality traits in terms of emotion, intelligence, family and social relationships. She set herself apart from other researches at the time by forming close relationships with chimps and naming them, rather than numbering them. Her famous chimps include: Goliath, Gigi, Flo, David Greybeard, Mike, Humphrey, Mr. McGregor and Frodo.

Goodall is a longtime vegetarian and currently traveling around the world promoting her book.

In Celebration of her Birthday, See the Path Jane Goodall Took to Become a Crusader for Conservation

So from me to Dr. Goodall, thank you for your endless and tireless work on behalf of these beautiful creatures. I hope you are celebrating your birthday in a big way!