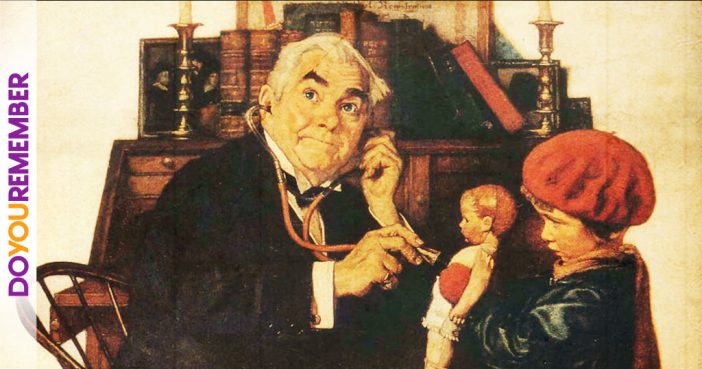 Did you ever have a doctor come to your home to help you when you were sick? Before WebMD and Dr.Oz, when a ‘House Call’ actually meant a doctor coming to your house to help remedy your ill condition?

Lots of people I know have recently come down with the flu. There’s a lot of that going around, I hear frequently. But then again, people are always complaining about the latest virus. What you don’t hear much is that there’s a lot of good health going around. But I digress. Even the roughest, toughest people turn into young children when they’re sick.

They seem physically less imposing, huddled beneath extra comforters in bed. We need increased attention to bring us a cup of tea, Tylenol, and a damp towel. We need our mommies. Bad.

As kids, not only did our moms lovingly attend to our cranky moods, but often the family doctor was summoned to make a house call. I imagine that some kindly physician somewhere still makes house calls, but there can’t be many. Talk about an unsustainable business model. Our doctor would drive to our house and trudge upstairs, medical bag in hand, to treat my siblings or me. He’d take our temperatures, listen to our heart and lungs, and utter a word or two of encouragement. Yep, he’d sagely proclaim, there’s lots of this going around.

Being Cured Was Not The Point…At Least Not The Only Point.

What’s so interesting is that there’d be very little he or anyone else could do in treating the flu or common cold, which had to represent 75 percent of all his house calls. But when I was a kid, doctors were held in awe, imbued with superhuman healing powers. There was such a formidable confidence in medicine indeed, in all of science and technology that it was assumed the family doctor could cure pretty much anything. Maybe it wasn’t a cure my mother would be seeking, but rather confirmation that her kid wasn’t suffering from some life-threatening disease, like the plague. People my parents age had awareness, if not direct memory, of the threat of polio, tuberculosis or small pox. The family doctor could allay those fears, providing more relief to a kids parents than to the kid himself. And I think that parents of that era were unsure and not a little bit insecure as to how much intervention they should be responsible for. While their parents might not have had the means to summon a doctor every time their kids temperature broke 98.6, modern parents had more money, more education and more keeping-up-with-the-Joneses competitive spirit to ensure their family’s health. My mom is long gone, and I know of no doctors who stop by the next time I get sick. So tough it out, keep Kleenex close, and fondly recall the days when there was always at least one adult nearby.

They’re Not Doctors but They Play Them On TV… Did You Favorite Make the List?