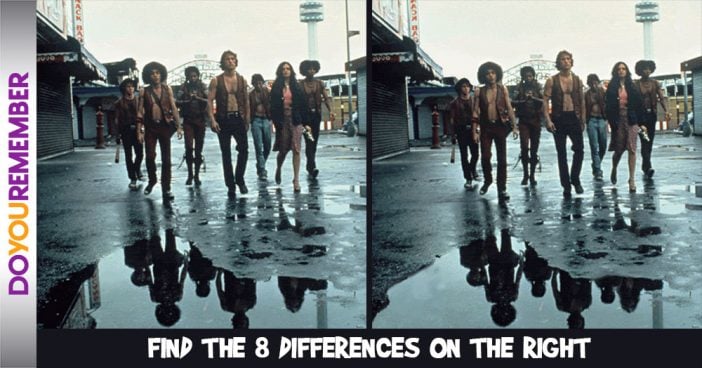 A 1979 American action thriller film directed by Walter Hill and based on Sol Yurick’s 1965 novel of the same name. This novel was, in turn, based on Xenophon’s Anabasis. The story centers on a New York City gang who must return to their home turf after they are framed for the murder of a respected gang leader. It was released in the United States on February 9, 1979. After reports of vandalism and violence, Paramount temporarily halted their advertising campaign and released theatre owners from their obligation to show the film. Despite its initially negative reception, The Warriors has since become a cult film, and it has spawned multiple spinoffs, including video games and a comic book series.

Warriors… Come Out and Play!

Cyrus, leader of the Gramercy Riffs, the most powerful gang in New York City, calls a midnight summit of all New York area gangs, requesting them to send nine unarmed delegates to Van Cortlandt Park. The Warriors, from Coney Island, attend the summit. Cyrus proposes to the assembled crowd a permanent citywide truce and alliance that would allow the gangs to control the city since they outnumber the police by five to one. Most of the gangs laud his idea, but Luther, leader of the Rogues, shoots Cyrus dead.

In the resulting chaos, Luther frames the Warriors’ leader Cleon for the murder, and Cleon is beaten down and most likely killed by the Riffs. Meanwhile, the other Warriors have escaped, unaware that they’ve been implicated in Cyrus’ murder.

The Riffs put out a hit on the Warriors through a radio DJ. Swan, the Warriors’ “war chief”, takes charge of the group as they try to make it back home. Almost immediately the Warriors are spotted by the Turnbull ACs who attempt to run them down with their bus, but the Warriors manage to escape and board the subway. On the ride to Coney Island, the train is stopped by a fire on the tracks, stranding the Warriors in Tremont, in the Bronx.

Setting out on foot, they come across a group called the Orphans who were not invited to Cyrus’ meeting and who are insecure and belligerent about their low status in the city gang hierarchy. Swan makes peace with the Orphans’ leader, Sully, who agrees to let the Warriors pass through their territory unharmed. However, a young woman named Mercy mocks Sully as a “chicken” and instigates a confrontation. Mercy’s goading convinces Sully to demand that the Warriors take off their colors and go as civilians before walking through their neighborhood. Swan and the Warriors flatly refuse Sully’s demand, which results in the Orphans challenging them to a fight.

Outnumbered and unarmed, Swan and the Warriors throw a Molotov cocktail at a car, blowing it up and using the opportunity to escape to the train station. Impressed, and desperate to escape her depressed neighborhood, Mercy decides to follow the Warriors. When they arrive at the 96th Street and Broadway station in Manhattan, they are chased by police and separated. Three of them, Vermin, Cochise, and Rembrandt, make the train to Union Square, while Fox, struggling with a police officer, falls onto the tracks and is run over by a train as Mercy escapes. Swan and the remaining three Warriors, Ajax, Snow, and Cowboy, are chased by the Baseball Furies into Riverside Park, where a brawl ensues in which the Warriors easily defeat the Baseball Furies.

After the fight, Ajax notices a lone woman in the park, becomes sexually aggressive and is arrested when the woman turns out to be an undercover police officer. Arriving at Union Square, Vermin, Cochise, and Rembrandt are seduced by an all-female gang called the Lizzies and invited into their hideout. The trio manages to escape the Lizzies’ subsequent attack, learning in the process that everyone believes they murdered Cyrus.

Having scouted ahead on his own, Swan returns to the 96th Street station and finds Mercy there. More police show up and Swan and Mercy flee into the tunnel. They have an argument and Swan continues to Union Square where he reunites with the other Warriors. A fistfight ensues with the Punks in a public restroom which the Warriors win. Meanwhile, the Riffs are visited by a gang member who attended the earlier gathering and saw Luther shoot Cyrus.

The Warriors finally arrive at Coney Island at dawn, only to find the Rogues are waiting for them. During the confrontation, Swan says “When we see the ocean, we figure we’re home” which is probably an allusion to the way the Greeks yell “thálatta, thálatta”, “the sea, the sea” at the end of the Anabasis. When Swan asks why Luther shot Cyrus, Luther says it was for “no reason” and “I like doing things like that.” Swan then challenges Luther to a one-on-one fight, but the Rogue leader pulls his gun instead. Swan throws a knife into Luther’s wrist, disarming him.

The Riffs then arrive in force and apprehend the Rogues, but not before acknowledging the Warriors’ courage and skill. As the Warriors leave, Luther screams in anguish as the entire Riffs gang descends upon the Rogues. The radio DJ then announces that the big alert has been called off and salutes the Warriors with a song, “In the City”. Swan, Mercy, and the rest of the gang walk down the beach, illuminated by the rising sun.

1. The Lettering in the Marquee is Facing the Right Way

2. The Building in the Background is Gone

3. Cleon is Missing His Satchel

4. Ajax is Missing His Arm Band

6. There’s an extra “Warrior” in the Water’s Reflection

7. The Light Pole Is Gone

8. The Building is Missing from the Water’s Reflection