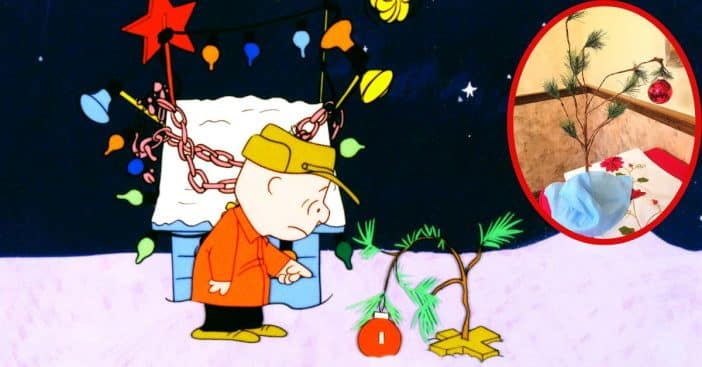 Of all the years for a thin little tree, this is the Charlie Brownest. Viewers first saw Snoopy, Charlie, and friends in a holiday adventure with the December 9, 1965, CBS premiere of A Charlie Brown Christmas. This particular Charlie Brown entry famously had a sad little Christmas tree that got a lot of criticism from the rest of the gang but today it’s receiving a lot of love.

In fact, it’s possible to buy a frail little Charlie Brown Christmas tree that just needs a little love for yourself. Some crafty people even make their own. This holiday decoration is bedecking more and more households with the same reverence as ceramic trees and stockings. Revisit this nostalgic item here.

The Charlie Brown Christmas tree is more popular than ever

According to 21Oak, Charlie’s holiday tree, all two branches of it, is very popular, especially this year. It helps that the look is so iconic; even when it’s drooped and bare, that single red ornament is iconic and immediately brings people back to watching Charlie Brown learn the meaning of Christmas. Soon enough, they, too, learn to appreciate the simple little plant, like Christmas magic is truly at work.

RELATED: Spot The Coca-Cola Ad In ‘A Charlie Brown Christmas’

It’s now very easy to find and buy a replica. Many stores and online outlets sell them, everywhere from Amazon to even Rite Aid. Some locations sell more proper-looking fir trees with more pine needles and the usual, upright shape. But others also sell the bare version, with a flexible wire base so consumers can shape theirs how they want. It’s a simple rig that sits atop two crisscrossing planks of wood covered in Linus’s signature blue blanket.

A Charlie Brown Christmas remains a highly culturally impactful holiday film, much to the surprise of the producers and CBS. In fact, it received both a Peabody Award and Emmy Award. The accompanying jazz album has sold five million copies in the U.S. alone and it enjoys annual airing during the holiday season, though in recent years Apple TV+ has claimed some ownership over that right.

At the time of its premiere, A Charlie Brown Christmas saw an estimated 15,490,000 households tuning in, which put it behind only Bonanza in the ratings. It’s this unmistakable success that enabled more Charlie Brown movie productions and represented a successful transition from comic book page to animation. With its place cemented as both a Christmas special and a piece of entertainment history, it’s no wonder one little tree is so popular to this day.

Click for next Article
Previous article: Bruce Willis Revises Will To Leave Less For Older Daughters
Next Post: Steven Spielberg Apologizes For Demonization Of Sharks After ‘Jaws’