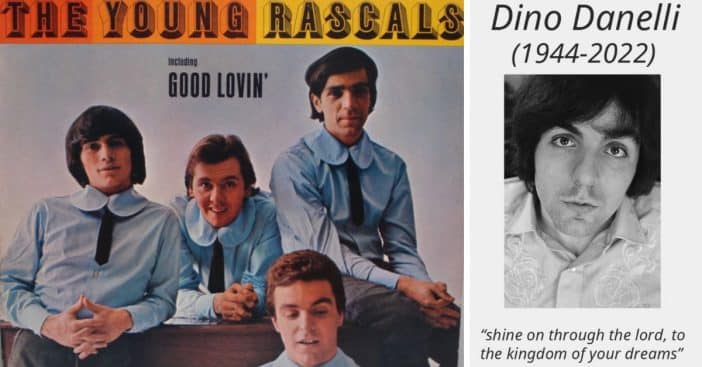 It has been reported that Dino Danelli, the drummer for the band The Rascals, has died at the age of 78. His death was announced and confirmed by spokesman Joe Russo on Danelli’s Facebook page. “Our beloved Dino passed away today. I will say more in the near future about his incredible talent and share experiences from his life he relayed to me, as well as ones we spent as friends and collaborators,” the statement read.

“I hope you will all continue to appreciate his talent and send him your love. Thank you for supporting his various endeavors throughout his career,” it said. “You all made it possible for him to live his dream, which was to be a musician and artist. Blessings to you all.”

Close friend and Rascals guitarist Gene Cornish also shared some words following the news of his bandmate’s passing, saying, “It is with a broken heart that I must tell you of the passing of Dino Danelli. He was my brother and the greatest drummer I’ve ever seen. I am devastated at this moment. Rest In Peace Dino I love you brother.” Also, in a separate post, Cornish thanked fans for their support.

“I wish I could answer all of your questions but as most of you know Dino was a very private person,” he said. “I will say this, Dino never cared about being a ‘rock star’ it was always about the music and art for him. Everything else was window dressing to him.”

Danelli and Cornish had originally co-founded the band the Young Rascals in 1965 alongside keyboardist Felix Cavaliere and percussionist Eddie Brigati. They debuted with the song “I Ain’t Gonna Eat Out My Heart Anymore.” They would go on to release eight Top 20 singles, including the No. 1 hits “Good Lovin,’” “Groovin’” and “People Got to Be Free.” It was after the release of their first three albums that they’d change their name to The Rascals for their fourth album Once Upon A Dream.

While Cornish and Brigati left the band after the group’s 7th album, Danelli and Cavaliere would stay for the band’s entire run. The band would officially split in 1972 after the release of their 9th album.

The band has reunited a few times over the years, and by 2013, they were taking their reunion shows out on the road.

Click for next Article
Previous article: The New Year’s Eve Ball Drop Comes From Sailing Techniques And A Low Watch Supply
Next Post: Tim Allen Opens Up About How Comedy Has Changed Since The ’70s