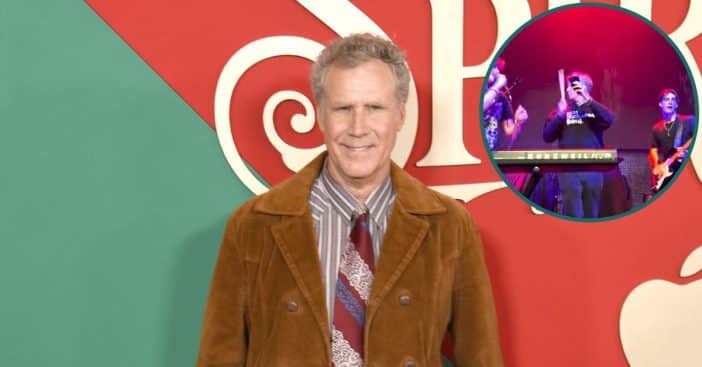 Proud father Will Ferrell recently surprised his son at a benefit concert for the Cancer for College charity. The 55-year-old dad showed up at his son’s performance while he was on stage with his band. Ferrell showed up with the instrument from his popular Saturday Night Live skit, “More Cowbell,” from two decades back and played the cowbell.

According to Rolling Stone, young Magnus Ferrell performed at the show for the charity organized by Craig Pollard to raise funds for cancer survivors to attain higher education. The band performed a cover of “Creep” by Radiohead and three of their songs. Ferrell hopped on stage and joined the band to play their original “Back in Place.”

Will Ferrell As A Proud Father

It was Magnus’ first public performance with the band, and his dad’s presence made it better and more memorable. The father-son-band group jammed the dance-pop song “Back In Place,” with slinky guitar lines and the famous cowbell, with Magnus singing the chorus:

“Now I’m trying to find a way back home. ‘Cause I can’t take another day on my own. No I didn’t hesitate, now I’m lost, wishing I would’ve stayed. But now it’s too late to put everything back in place.”

Ferrell has three kids— Axel, Matthias, and Magnus with his wife, Viveca Paulin, who he married in 2000. In an interview with People at the SXSW premiere of his movie, Get Hard, Ferrell opened up on what fatherhood has been like for him. “What happens with three boys is you end up barking out orders like, ‘Upstairs now!’ ‘Brush teeth!’ ‘Lights out!'” he said. “There is so much chaos you can’t really take the time to articulate.”

18-year-old Magnus Ferrell started his music career at the age of 12, writing songs and studying Jazz in 8th grade. He was featured earlier this year in the Young Creators Project profile, where he sent in a song he wrote in 8th grade. “The specific song I sent in, it’s funny, it was about an eighth grade girlfriend,” young Ferrell said of his song “Held You So.”

“Songwriting and music is so special to me, as it has played such a therapeutic role in my life,” he added. “It has helped me through times where I’m not at my best, and I hope to move and help others dealing with the same.”

Magnus was also a child actor, starring in 2013’s Anchorman 2: The Legend Continues, and If You Build The House, They Will Come in 2017.