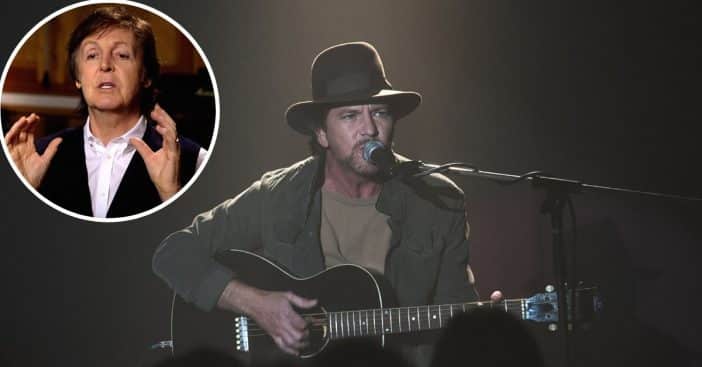 Pearl Jam’s singer Eddie Vedder has a very interesting story about the Beatles’ Paul McCartney. He said that he was once hit by Paul while at a hotel bar in Seattle. Not to worry, it was actually an accident and Eddie still laughs and jokes about the incident to this day.

Eddie has revealed over the years that he was heavily influenced by Paul and the Beatles. The Beatles album of the same name is one of his top favorites. Eddie said that he was once swapping stories with Paul at the bar.

He explained, “I was fortunate enough to be with Paul McCartney in the corner of a Seattle hotel bar and talking story. He kind of was illustrating how he hit this guy and when he did that, he kind of shot out his left arm as if he was hitting this guy, and I was standing there, and I got hit. He hit me! He didn’t quite pull back the punch, you see.”

RELATED: The Beatles: Origin Of The Popular Pop Band’s Name

He continued, “So, the story kept on, and it was a great, incredible personal story. I caught the end of it, but as I was listening, I was thinking, ‘Paul McCartney just hit me in the face,’ and it hurt. I think I remember tasting a bit of blood, he got me right on the side of [the face]. And he apologized quickly so it wouldn’t get in the way of the story.”

These days, he considers it an honor to be hit by the famous Beatle. Eddie joked, “A great time in my life, actually, to be hit by Paul McCartney. I remember it hurt for a few days, and I remember when it went away, and the pain subsided, and the swelling went down, I kinda missed it.” Most people cannot say they have been hit by one of the greats, after all!