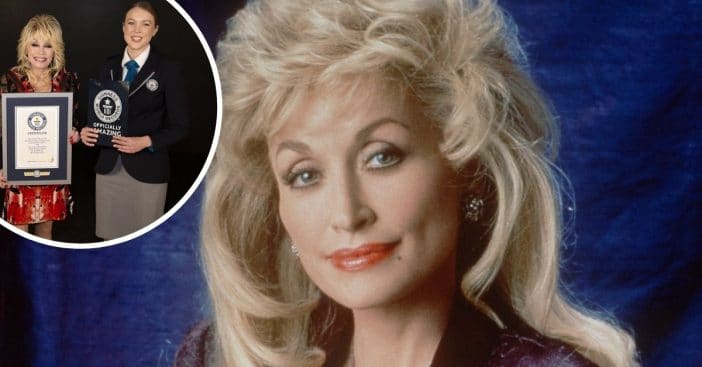 75-year-old Dolly Parton was just awarded three new Guinness World Records! Dolly broke the record for most hits on Billboard’s list, with 109 songs making it on the list over the years. She also won for the most decades (7) and most No.1 hits (25) on the Billboard US Hot Country Songs chart, both for a female artist. Dolly shared a statement about how excited she was to receive the awards.

She said, “This is the kind of stuff that really makes you very humble and very grateful for everything that’s happened. I had no idea that I would be in Guinness World Records this many times! I am flattered and honored. I’ve had a lot of people help me get here. Thanks to all of you and all of them for helping me have all of this.”

Dolly continued, “I’ve loved being able to make a living in the business that I love so much. I’ve been so fortunate to see my dreams come true, and I just hope to continue for as long as I can. You’re going to have to knock me down to stop me!”

Dolly is not just a singer. She is an actress, appearing in films such as the classic 9 to 5. She also owns her own theme park called Dollywood, among other accomplishments. Growing up in a poor family, she began making hit music in the 1960s.

Dolly already has the Guinness World Record for most decades with a Top 20 hit on the US Hot Country Songs chart (6). Congrats to Dolly!

RELATED: Dolly Parton Has Always Been Very Afraid Of One Thing

Click for next Article
Previous article: Jaclyn Smith Shares Rare Photo Of Her Adult Son And Why He’s Her Favorite Human
Next Post: Bridget Hanley of ‘Here Come the Brides’ Has Died at 80