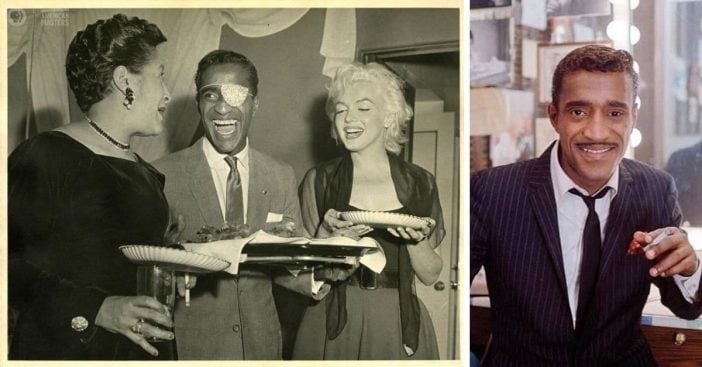 An enormously popular singer, comedian, actor, and dancer, Sammy Davis Jr. lived an endlessly fascinating life. He was an African American man who grew up and began his career in entertainment in a country that was still segregated. Even after the civil rights movement of the 60s, he faced discrimination, something that must have felt particularly apparent when performing with the otherwise all-white Rat Pack.

He was married three times, had four children, and served in the U.S. Army. To add to Davis’ enigma he was in his own words a “one-eyed Negro Jew.” In 1954 Davis was involved in a serious car accident that cost him his left eye. Davis feared that the loss of his eye would also cost him his career. But in the end, the accident only served to make his fame stronger and inspired Davis to convert to Judaism.

The Accident That Cost Davis His Eye

On an early November morning in 1954, Sammy Davis Jr. was driving his lime green Cadillac from Las Vegas to Hollywood for a recording session. Two women and Davis’ valet Charlie Head rode with him. As Davis was driving through the Cajon Pass, a car suddenly stopped in front of him, apparently in preparation for a turn. Davis was not able to stop in time. His Cadillac crashed into the car and his face smashed into the cone in the middle of his steering wheel.

RELATED: Beautiful Photos Of Sammy Davis Jr. And May Britt On Their Wedding Day

Davis was eventually transported to Community Hospital and the city’s eye and ear surgeon Fred Hull arrived. After examining his patient, Hull broke the news that Davis’ left eye was so badly damaged it would have to be removed. However, Davis was more concerned about his injured leg, which he asserted was much more important to him as a dancer. Hull assured him his leg would be fine, and Davis was taken to surgery.

When Davis left Community Hospital wearing an eye patch and carrying sacks of fan mail, he promised to return to help raise money for the facility. “He said he would do it, but when he left, we said, ‘He’ll forget,’” recalled hospital administrator Virginia Henderson. She was wrong. Four years later Davis hosted a benefit to raise money for new equipment for Community Hospital. The benefit featured an array of eclectic performers, including the famous Judy Garland. The event raised $20,000 for the hospital.

Davis’ accident and the loss of his eye had a profound impact on the rest of his life. He returned to the stage a mere weeks after his accident wearing an eye patch or prosthetic. Instead of tanking his career, Davis became a bigger star than ever before. The accident also inspired Davis to convert to Judaism. He stated that after the accident he, “needed something desperately to hold onto. I found myself being more and more convinced that Judaism was it for me,” he remembered. Luckily Davis did not let losing his eye keep him off the stage for long.