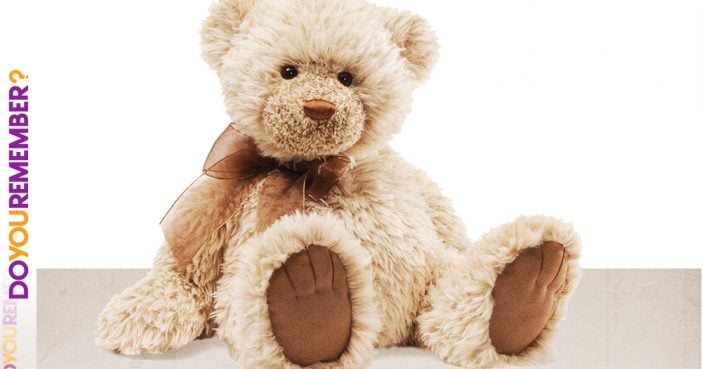 I was afraid of the dark when I was a little boy. It got so bad that even into middle school, the dim glow of a nightlight wasn’t enough to make me feel secure enough to fall asleep. The only thing that would do the trick was Teddy, my old Teddy bear I had since I was a baby.

Teddy was my “binky” or security blanket. By day he stared at me from my rocking chair and by night, he slept with me in my bed. He was the only thing (besides jumping into my parent’s bed) that gave me a good night’s sleep in my room.

He was soft. He was worn-in with patches from “surgery” to repair a bad encounter with our dog. And I never let anyone wash him – ever.  Anytime mom, or grandma or anyone said “It’s time to wash Teddy” I would grab him and refuse to let that happen. I’d come up with some excuse, like, “Bears don’t like to take baths”. But it’s really because the smell of Teddy was so good, and I was afraid he would end up smelling like Johnson’s Baby Shampoo or Borax or other soap flakes and would no longer be “my” Teddy.

As a child, it was probably one of my deepest secrets. I thought that if any of my friends found out about my Teddy dependence, I would not be able to show my face at school again. I feel badly now that I believed I had to unceremoniously stuff Teddy into the back of my closet every time my friends would come over to hang out. I was afraid of ridicule for both my phobia and my Teddy. But come nightfall, Teddy would be out again, comforting and protecting me from whatever went bump in the night (even if it was only in my head) and quietly listening as I spoke to him, keeping all my deepest and darkest secrets between us.

I asked some friends share their Teddy bear and security blanket stories. It seems that everyone has a story. Everyone had a blanket or bear.  And more than a few of us were afraid of something as a kid and never shared it until now.

One friend had a giant bear from as long as he can remember. It was about 3 to 4 feet tall and just sat in the corner. Another had a collection of bears, including Teddy, and Paddington, but she mostly favored the tiny little Beanie Babies which I had little or no connection to. To me, a Teddy bear had to be big enough to cuddle but not too big to drag around.

I found that when asking around, there were some who had a bear, others who had a blanket and some who had both (or collections of both). Michael had an Afghan blanket that his grandmother knitted for him as a baby. He curled up with as he sucked his thumb growing up. Once when the housekeeper at his childhood home washed it, it shrunk and became coarse, and the smell was gone. It devastated him and he never touched the blanket again. And Glenn H, a friend of his, still has his baby blanket, (named “Part” for the satin part at either end of the tiny blanket where he rubbed his fingers along the soft, smooth material) tucked neatly between his comforter and flat sheet of his very fancy bed in Los Angeles.
I don’t know what happened to Teddy but I have to say that I miss him from time to time. I think that if I had Teddy today, I would apologize for putting him away in shame as my friends came over. I would proudly have him sitting comfortably on the rocking chair in my bedroom again, or even give him a prominent and permanent place on the bed. I’m more comfortable as an adult now and there’d be no closet for Teddy (and none for me, either) anymore. I miss you, Teddy. And I just want to thank you for being a great friend.