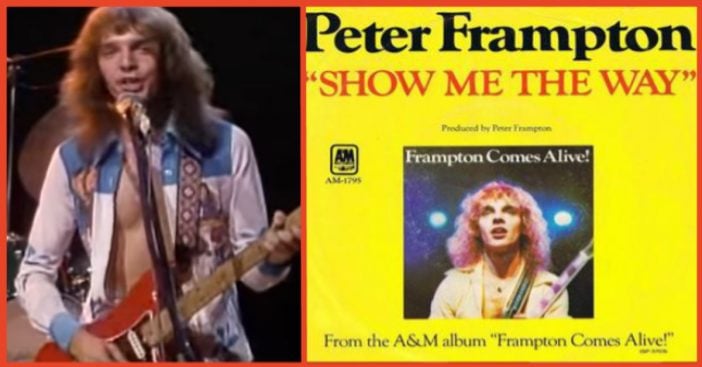 This is Peter Frampton’s biggest hit. It took off when he included the song on his 1976 album Frampton Comes Alive, which in the US was the best-selling album of 1976. The studio version was released as a single in 1975, but went nowhere. The live version is the hit.

This song is some of the best music ever in my opinion. It really feels from the heart and takes me right back to the seventies and a simpler time. Frampton is a true musician of the ’70s and ’80s, in a time where they ruled the world. I can still picture myself with windows down in the summer of ’76, blaring this song from my radio.

I wonder how you’re feeling
There’s ringing in my ears
And no one to relate to except the sea
Who can I believe in?
I’m kneeling on the floor
There has to be a force
Who do I phone?
The stars are out and shining
But all I really want to know

Well, I can see no reason,
You living on your nerves
When someone drops a cup and I submerge
I’m swimming in a circle,
I feel I’m going down
There has to be a fool
To play my part
Someone thought of healing,
But all I really want to know