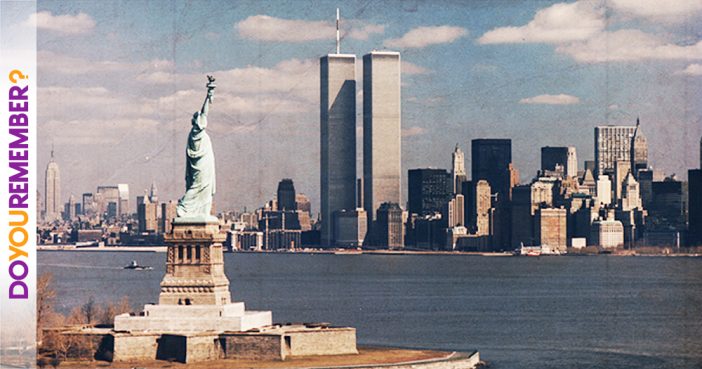 Today marks the anniversary of the September 11th, 2001, attacks on the World Trade Center and Pentagon. While the national media rebroadcasts footage showing the death and destruction of that day, we at DYR remember the iconic buildings and those who built, visited and worked in them with a retrospective on the site, the towers’ construction and the culinary landmark that stood atop 1 WTC.

Radio Row was a district of Manhattan’s Lower West Side on Cortlandt Street that specialized in the sale of electronic equipment and parts. It was in existence from 1921 to 1966, when eminent domain was invoked to tear down the low-rise buildings to make way for the World Trade Center.

Though the idea of the World Trade Center was first discussed in the early 1940s, the parties involved in the plan—from the states of New York and New Jersey to the jointly run Port Authority—did not come into full agreement until the early 1960s.

Designed by architect Minoru Yamasaki, the original plan called for only 80 stories, but Port Authority’s requirements necessitated 110 stories. Yamasaki’s design was noted for incorporating sky lobbies, where workers could switch from express to local elevators, as well as narrow office windows—a reflection of his fear of heights.

Groundbreaking began on August 5th, 1966, but it was not without its share of controversy. More than 100 residents adamantly resisted their forced relocation from the old neighborhood, and filed an injunction against the state’s use of eminent domain. The case even made its way to the U.S. Supreme Court, but the justices refused to hear it. Once completed, the buildings also received a degree of aesthetic criticism, with esteemed writer Lewis Mumford calling the towers “just glass-and-metal filing cabinets.” Additionally, they were seen as creating a new kind of urban “superblock,” replacing the human density of older neighborhoods. As the years progressed, however, they came to be seen as an ultimate symbol of the city, beloved by New Yorkers everywhere.

When the construction of both towers was complete, the total cost was around $900 million. A ribbon-cutting ceremony was held on April 4th, 1973, although some tenants had occupied space for almost a year.

When they were completed, the towers were the tallest structures in America, eclipsing the record held for more than 40 years by the Empire State Building. They held this title briefly, however, as Chicago’s Sears Tower would rise even higher the next year. Still, the WTC had more floors, a record only surpassed in 2010 upon the completion of Dubai’s Burj Khalifa.

Windows on the World

Located on the 106th and 107th floors of the WTC’s North Tower, Windows on the World was a New York culinary landmark. Developed at a cost of more that $17 million, its most memorable features—apart from the breathtaking view—were a Danish smorgasbord, a small but exquisite wine bar and a notoriously strict dress code.

In 2000, its last year of operation, it made profits of more than $37 million, making it the highest-grossing restaurant in America.