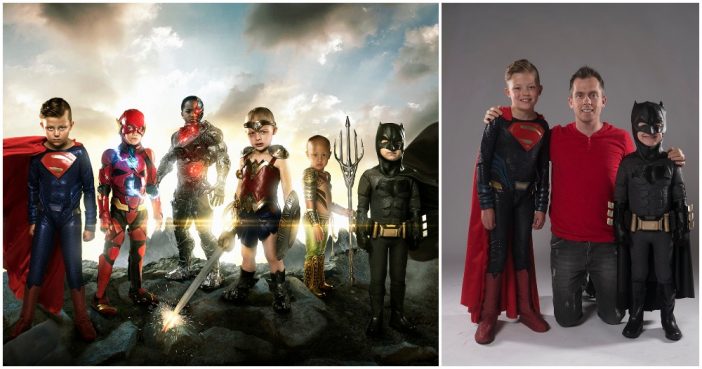 The child chosen for Superman, Teagan, was born with half a heart, as well as some other medical problems, and so had to go through multiple surgeries at a young age as well. According to Rossi, the kid “really related with Superman” even before the photo shoot, because “they both have one weakness.” (Superman’s weakness is Kryptonite.)

Due to the significance of each child’s personal connection to their superhero, “It was a pretty emotional shoot,” Rossi said. “Some of the kids showed me the scars they have on their chests.” Teagan, for example, seemed “like a healthy kid” to Rossi, until he pull off part of his Superman costume. “He has scars all over his body. It just hit me again. It was sort of like shock, realizing this actually happens, but also realizing how strong these kids are.”

The photoshoot was also powerful, in that it “got them [the kids] out of their reality, out of the fact that they were sick and had [radiation] therapy that week,” like Sophie, the little girl who played Wonder Woman. For the photo shoot, Nelee was so excited to lend her outfit to Sophie, and the 4-year-olds even had a chance to talk on the phone about Wonder Woman.

Page 2 of 3
Previous article: The Karate Kid Cast (1984) – Where Are They Now?
Next Post: The Golden Age Of Travel: This Is What Your Flight Used To Look Like (And It’s Actually Crazy)