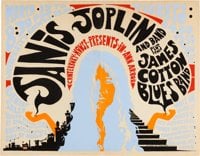 Heritage Auctions, a Dallas based auction house, opened up a treasure trove for music buffs, presenting a rare collection of more than 100 original concert posters — from Jimi Hendrix, the Velvet Underground and Nico, and Hank Williams, among other musical legends—belonging to an anonymous collector. Now, that same collector is back for an encore, presenting a new round of 133 original posters promoting the Beatles, Bob Marley, Barbra Streisand, Janis Joplin, and other immortal 20th-century names. The Auction is March 18th.

Check out a few items expected to be in the auction and get bidding!!

Previous article: Remember The Day You Learned To Ride A Bicycle?
Next Post: Which Snack Was All The Rage The Year You Were Born?