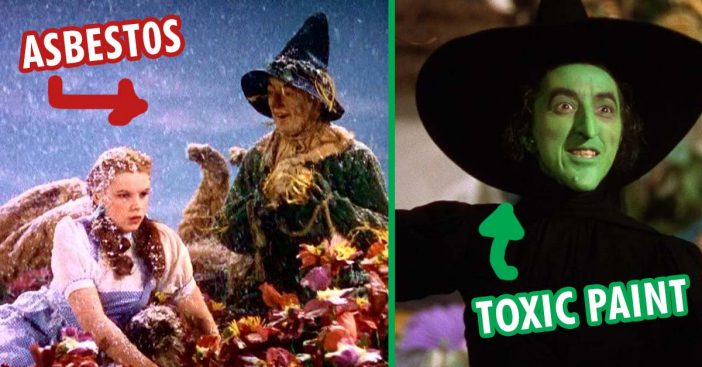 The Wizard of Oz is one of those classic movies that you can watch over and over again. Made in 1939 and starring the beautiful Judy Garland, it has been remade many times throughout the years. Nothing beats the original though! However, as time goes on, more and more bizarre facts from the set of the film come out.

In 1939, unfortunately, movie sets were not as safe as they are today. The props also could have long-lasting damage to the actors. Learn about some of the craziest things that happened while filming The Wizard of Oz:

1. The green makeup the Wicked Witch wore was extremely toxic

Back in the day, paint often included a variety of toxic chemicals. The green paint they used to cover Margaret Hamilton’s body for her costume contained toxic levels of copper. She had to stay on a strict liquid diet while filming because of it.

2. The studio had to hire attendants to help the Munchkin actors use the bathroom

A Munchkin actor reportedly got stuck in a toilet for 45 minutes. After that, MGM hired people to help them get on and off the toilets. This was because the costumes were so difficult.

Not only did she have to endure the toxic makeup, but she suffered from second and third-degree burns! Unfortunately, during a scene, she got caught in a trap door trying to escape a fire and spent six weeks recovering from her burns. Poor Margaret!

Click to read the NEXT page to find out who was originally set to play The Tin Man!