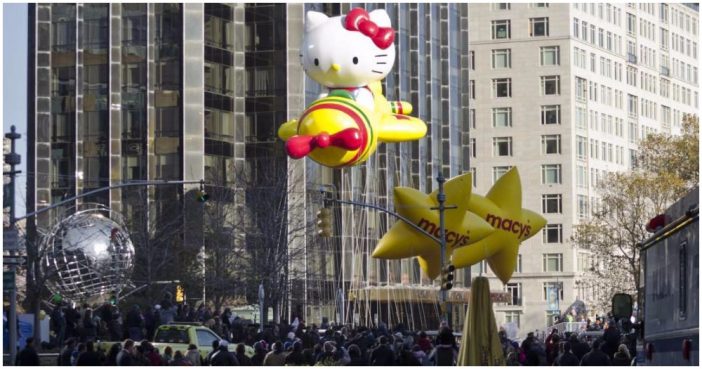 This Thursday, Macy’s will send its 91st Thanksgiving Day Parade down the streets of Manhattan—a spectacle more than 50 million people tune in to watch from the comfort of their homes. Here are a few things you might not have known about the iconic holiday event.

1. It all started with Santa…

On Thanksgiving day, 1924, hundreds of Macy’s department store employees came together to celebrate one of America’s most treasured holidays: Christmas. Yes, the famous Macy’s Thanksgiving Day Parade officially began as the Macy’s Christmas Parade—and that’s not even close to being the most unusual change in the beloved procession’s 92-year history. Read on for the bizarre story of power-walking elephants, balloon bounty hunters, the poor souls who have to wash all 4,000 costumes every year, and more fascinating facts about the Macy’s Thanksgiving Parade.

Beginning at 145th street in upper Manhattan and ending at the Macy’s flagship store on 34th street, the 111-block parade took several hours to complete. At the time, this was only possible by hitching horses to the parade floats and relying on them to drag the festivities halfway down the island. The cleanup must’ve been a nightmare!

The Macy’s parade was way furrier from 1924 to 1926. Borrowed from the Central Park Zoo, a procession of elephants, camels, tigers, goats, and other live beasts strutted down the streets of New York for the crowd’s amusement, some draped in Macy’s pennants to advertise the show.

After 1926, the zoo animals were replaced with the huge helium balloons we know today; supposedly, live beasts freaked out the kids too much. Check out some funny stories about animals acting like humans.

For the first few years, parade officials had no plan for deflating their massive balloon companions. Their solution: just let them fly away and explode in the atmosphere. In 1928, Macy’s even made a game of it. Handlers released five balloons—an elephant, two birds, a ghost, and a 60-foot tiger—into the sky and challenged bystanders to capture them for a $100 reward. The tiger landed first, on top of a Long Island home, inciting a vicious tug of war. “Neighbors and motorists rushed up from all directions,” the New York Times reported. “The rubberized silk skin burst into dozens of fragments.” Here are some more answers to your biggest questions about Thanksgiving.

A 60-foot tom cat balloon was released after the 1932 Macy’s parade and nearly sparked disaster when an aviation student spotted it floating at 5,000 feet. Much to her instructor’s dismay, the 22-year-old student spontaneously decided to ram her plane into the cat’s neck (whether this was to collect the prize money or just make headlines, nobody knows). The balloon disabled her wing. The plane plummeted toward earth. The instructor seized control at the last minute, saving them both. Needless to say, that was the last year Macy’s released their balloons. Here are some more crazy stories of bizarre flight delays.

In other amusing balloon malfunction history, the 1957 Macy’s parade was beset by a sudden rainstorm. Popeye the sailor man took the water in stride, collecting rain in the dip of his hat until it became too heavy for his rubbery neck to support. Popeye dropped his head, flooding the crowd below in a gush of rainwater, then bounced back upright and began the process again. For some more Thanksgiving humor, check out these funny Thanksgiving quotes.

8. A helium shortage led to some creative balloons

Macy’s is the world’s #2 consumer of helium (the first is the U.S. government). But amidst a national helium shortage in 1958, it looked as though there would be no parade balloons. Fortunately, parade organizers came up with a creative back-up: Fill the balloons with regular air, then hang them from giant construction cranes like big, puffy marionettes. It actually worked: Here’s what that looked like.