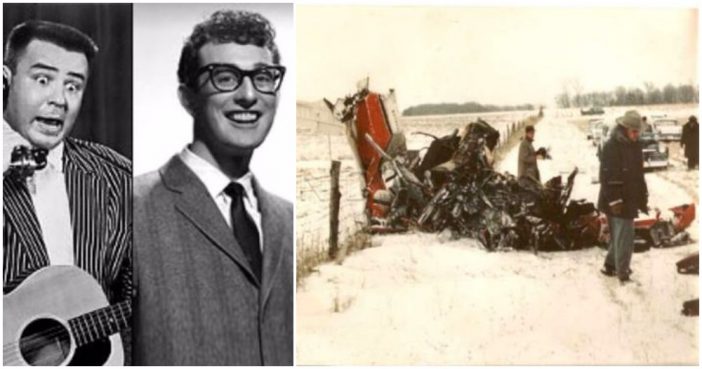 There are conflicting stories as to how Valens wound up in the third seat. Tommy Allsup, Holly’s guitarist, claimed that he lost a coin flip to Valens in the dressing room. In 2010, Dion DiMucci, who had been silent about that night for 51 years, claimed that he, not Allsup, was slated for the third seat because he was one of the headliners. But after winning the coin toss, he balked at paying $36 for the flight — the amount his parents paid in monthly rent for the apartment where he grew up — and gave Valens the seat. Local DJ Bob Hale, who was the MC for the concert, agrees that it was between Allsup and Valens, but that he, not Allsup, flipped the coin.

Regardless of the contradictions, around 12:55 AM on Feb. 3, the plane carrying Holly, Richardson and Valens took off in a snowstorm with strong winds. But the plane traveled only a few miles before crashing, killing all four men instantly.

The federal investigation ruled that even though the weather played a large role in the accident, the 21-year-old Peterson was too inexperienced to have been flying in such conditions. In addition, he had most likely misread the altitude indicator, which was different than the one on which he had trained, and inadvertently brought the plane down instead of up.

At the time, Holly’s wife of six months, Maria Elena, was two weeks pregnant. The day after the crash, she suffered a miscarriage from the emotional trauma.

In March 1980, a long-missing piece of the plane crash was discovered. Holly’s signature black-rimmed glasses had landed in a snow bank and were discovered in the spring of 1959, after the snow melted.

They were brought to the Cerro Gordo County Sheriff’s office, sealed in a manila envelope and forgotten about for 21 years. Upon discovery, the glasses were returned to his widow and are currently on permanent display at the Buddy Holly Center in his hometown of Lubbock, Texas.

Watch the video for more information: