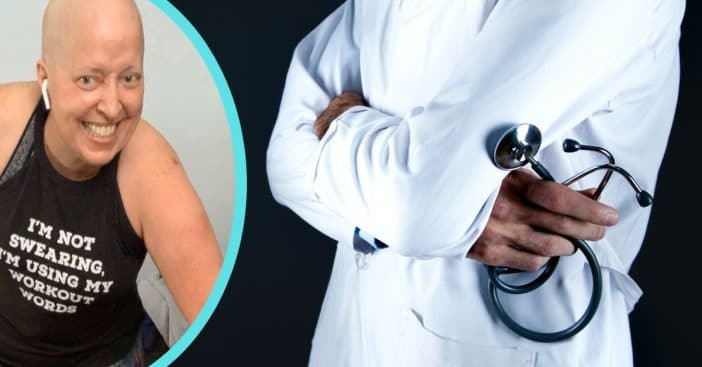 47-year-old Heidi Richard has come a long way literally and metaphorically. The elementary school teacher is also an avid runner, but a few years ago, ongoing stomach pains interfered with her time training for marathons. When she went to the doctor, she was told it was anxiety. It was not; it was cancer.

Richard shared her story with TODAY, and it takes her through several misdiagnoses to treatments against a tumor – and has given her lessons about health she now wants to impart on others as she recovers from her difficult journey.

When, in 2019, Richard began experiencing nighttime stomach pains, sweats, and vomiting, these were very uncharacteristic for her. Richard describes herself as healthy and has been an avid runner since high school. She eventually went to the doctor, had some blood tests done, was given antacid and was told “You’re young, your stomach issues are probably due to stress or anxiety.” Her symptoms persisted, culminating in a 30-pound weight loss Richard did not pursue deliberately; it was a consequence of being unable to consistently eat and keep her food down. Another doctor’s appointment and Richard came away with anxiety medication.

By February 2020, the symptoms continued not just into the night but during the day, even as Richard trained for the Providence Marathon. She could no longer keep up with her training group. When another doctor’s visit just saw her given muscle relaxers, Richard insisted on an imaging test, and that’s when at last she was diagnosed with stage 4 diffuse large B-cell lymphoma. Signs of it were everywhere, Richard shared, “my abdomen, spleen, bone marrow, sternum, lungs, groin and neck,” and that’s not counting the tumor pushing her intestines to the side. Finally, she could get the treatment she needed.

Heidi Richard shares a lesson from this battle

Richard had to undergo chemotherapy, an autologous stem cell transplant, and immunotherapy. Transfusions occur every three weeks and last hours. However, Richard still has her fighting spirit that keeps her moving one step at a time – literally, as she trains now for her first Boston Marathon. She has to factor in the 48 hours of fatigue she feels after treatment, in addition to joint pain. “I’ve done the training, I’ve done the miles. I feel ready in that regard,” Richard shares. But, she adds, “Emotionally, I’m a little anxious. I feel ‘nervexcited, which is a word that my daughter uses when she’s nervous but also excited for something.”

Next fall, Richard will be in remission for two years. But in addition to combatting this cancer, Richard also had to fight for her diagnosis and contend with the lesson she learned and now imparts on anyone else feeling off. “I often wonder if I would have been taken more seriously if I were male,” she wondered. “Doctors kept saying, ‘Oh, it’s anxiety or you can’t handle the stress of your job or you’re overreacting. It’s not a big problem.'” And when the doctors first gave their verdict, she trusted them, “believed them, even though I knew something wasn’t right.” Now, she advises others, “Know what your baseline is and when something is wrong, don’t be afraid to ask for a second opinion or ask for that test.” Richard also has stressed, “You’re the one who knows yourself the most and if you’re not feeling your best, you need to advocate for yourself.”

Click for next Article
Previous article: John Wayne And Kirk Douglas Reportedly Never Saw Eye-To-Eye
Next Post: This Is How Much Old Hollywood Stars Paid For Their Homes