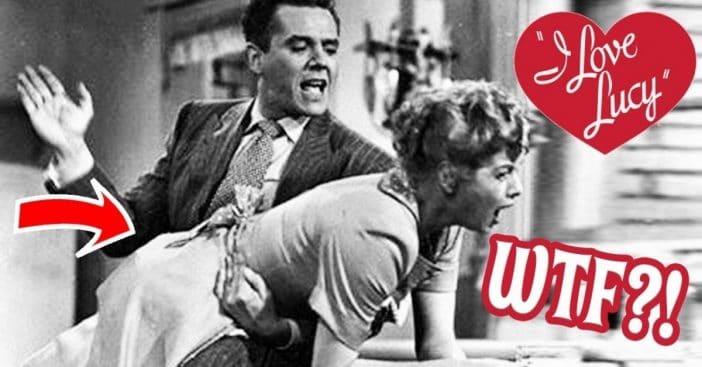 You flip on the TV for some laughs today, and you’ve got options a-plenty. But where did it all begin? At the end of the day, all our favorite sitcoms in some way owe a lot to I Love Lucy, led by the revolutionary Lucille Ball and Desi Arnaz.

So, how does someone go about making television history? Well, first they had to conquer some behind-the-scenes issues to get the ball rolling, and it took an army to keep the comedy going, too. It’s time to uncover why the world decided to love Lucy, and set the bar for comedy so high. Now, let’s unpack some mysteries of the iconic, I Love Lucy.

Before America met the wacky and dysfunctional Ricardos, Lucille Ball had a radio show called My Favorite Husband, with Richard Denning playing her husband. After its surprising success, CBS approached Ball to develop it into a series, keeping Denning as the hubby. That’s where Ball first put her foot down, only making the series if her real-life husband took Denning’s place. Desi and his family came to America from Cuba and CBS didn’t think America would tune in to watch him.

So, husband and wife got creative and first made their very own traveling vaudevillian act that traveled along with Desi’s rhumba band. And Wouldn’t you know it, audiences loved them. The “Professor” skit was the final piece of the puzzle that convinced CBS.

Uh oh, are they smoking?

I Love Lucy benefited hugely from the leads’ authentic marriage, even if their relationship had some real hurdles- for more on that, check out our deep dive into the life of Lucille Ball. The show really WAS rooted in reality – in some surprising ways, too. Every single episode played host to one Miss Dede Ball, Lucille’s mother, and she had an iconic job at these tapings. When Lucy was about to get into some hilarious trouble, an audience member could be heard yelling: “uh oh!” The “uh oh” woman was Dede Ball herself!

And you’ve maybe heard that telltale “uh oh” in other famous shows too, as the taped laughter from I Love Lucy became a popular source of laugh track for Bewitched, I Dream of Jeannie, and more. Then, of course, the show gave little Desi Arnaz Jr. his very first role when Lucille’s pregnancy became part of the program. Sometimes there’s such a thing as too authentic, like when Lucille and Desi really smoked on the set. No props here. That might violate the deal they had with the tobacco giant Philip Morris, who served as the main financial backer. They indeed brought up Philip Morris whenever possible. Okay, Lucille did cheat a bit- she was more of a Chesterfield lady, so a stagehand would swap them out in secret. Take that Phillip, you too, Morris.

As for the famous couple of Fred and Ethel, those actors were notoriously not a bit close when the cameras stopped rolling. But the characters’ names were based in reality, Fred helming from Lucille’s brother. And Ethel, a tribute to Lucy’s longtime pal and famed Broadway star, Ethel Merman.

Lucille and Desi broke down barriers and showed that America could love a Cuban-Irish-American couple. Then there’s all the firsts it made. Usually, TV programs were filmed and aired out of New York, but as new parents, Lucille and Desi didn’t want to move to the east coast. They wanted to be around everything they knew. But back then, TV wiring didn’t reach coast to coast, and recording quality could plummet. So, what do you do when you reach an impasse? Invent a whole new way of filming sitcoms.

Desi proposed the first use of a 3 camera setup for sitcoms, and that came with its own problems, so they brought in the best in the biz. Lucille and Desi both agreed to take a cut from their salary to have money for this new technique and talented crew needed, and it then became a standard TV. And the Arnazes went from pay cut to the first millionaire TV stars in history. Then Desi pulled another magic trick and invented the idea of reruns. When Lucille became pregnant, Desi started airing old episodes, sometimes with different lines and backdrops, so Lucille could have a break from shooting and raise their new addition.

Trick of the Eye

Stardom isn’t armor against insecurities. He was a big name but Desi Arnaz stood at 5 feet, 9 inches, and felt this was too short, So, he wore 3 to 4-inch heels, taking him to a strong 6 Foot. It was the only way Lucille wouldn’t tower over him when she wore her own heels. The audience also never saw the big seat cushion Desi used to even the sitting height differences. It also gave him a helpful boost getting back onto those heels. The indomitable Michael Landon had the same insecurities and adopted more height adjustment tricks, check out our deep dive into his rather tumultuous life for more.

Picture yourself far from home and full of dreams. That’s the chance Desi’s family took when they fled instability in Cuba for the American Dream, and Desi became a very vocal American patriot when he got here, too. He went from seeing his family’s house burned down, to cleaning birdcages for a living, to getting a special toast on The Ed Sullivan Show.

His patriotism was visible in his acting. Or his non-acting. When the episode “Lucy Tells the Truth” had Ricky lie on his income tax return, Desi flat out refused to do the episode. He didn’t want anyone thinking Ricky would cheat the U.S. government.

Every episode had 300 lucky people as part of the live audience. Since this theater stage-TV mix was new, the show had a learning curve. They really didn’t like breaking audience immersion by yelling “Cut!” when a scene ended. So, sometimes the actors had to figure it out on their own. That happened in the episode “Redecorating the Mertzes’ Apartment,” where Lucy kept talking out loud about fixing the Mertzes’ home and relationship. Desi jumped right in to get them back on track.

And watch the opening and end credits across the years and some people’s names aren’t just spelled differently, they’re flat-out changed. Ethel has been Ethel Roberta, Ethel Louise, and Ethel Mae. Depending on the episode, her husband Fred has been Freddy spelled with a Y but sometimes an -ie. Happy Hunting.

If you can think of it, there’s probably a show for it, as the TV landscape has exploded in the last few decades. But it was I Love Lucy that first broke ground for that, thanks to them embracing the dreaded P-word… pregnant. By season 2, Lucille became pregnant and had 3 heartbreaking miscarriages before she had her daughter Lucie, but showing pregnant women on TV was rather taboo – especially the belly bump. So they made her pregnancy part of the show and Desi requested help from a priest, a rabbi, and a minister to watch the related episodes for anything questionable or suspect.

CBS had its own complaints: the word pregnant was, in their view, vulgar, so they could only call it “expecting.” In the show, Ricky was supposed to sing when Lucy told him she was expecting, but the two had so many real emotions tied to this pregnancy, that they cried instead. Definitely a powerful moment in television history.

Don’t you hate it when some grape stomping turns deadly? That wonderful episode titled, “Lucy’s Italian Movie” took a lot to make happen, like the logistics of getting enough grapes, and adding the disclaimer that no, grape stomping isn’t the standard for making wine anymore in Italy.

Then there was the issue of something getting lost in translation. The actress opposite Lucille for that scene didn’t understand any English, so a translator explained the scene. Apparently, she didn’t quite get it, because when they started wrestling, the woman actually held Lucille’s head in the grape juice – and kept holding it under, to the point Lucille had trouble breathing. Yikes.

Arnaz lived by a simple philosophy: if the actors believed, so would the audience. That meant he was a big stickler for realism. So that 8-foot loaf of bread popping out of the oven in “Pioneer Woman” was ACTUALLY an 8-foot loaf of bread – rye bread, to get specific – lovingly made by a local bakery. Then, when the gang goes “Deep Sea Fishing,” those are actual giant tunas that weighed over a hundred pounds, caught straight from San Francisco’s Fisherman’s Wharf.

All things must end

Few shows don’t overstay their welcome. Sure, we’d love a great program to go on forever, but ideas run dry. I Love Lucy is one of the few that ended on a high note- in fact, it was one of just a handful to finish at the top of the Nielsen Ratings, a place it held for four out of its six seasons! After a while, they got tired of the formula. It didn’t help that the main couple was having a harder time working together. We almost got a spinoff following the Mertzes, but Vivian Vance did not want to work with William Frawley for another second, and so, the truly ground-breaking I Love Lucy ended while on top.

From the grape smashing to the candy conveyor belt… what’s the best episode of I Love Lucy that you recall? Do you think it’s the best sitcom of all time? If not, what is? … Get in those comments and let’s discuss some classic television.