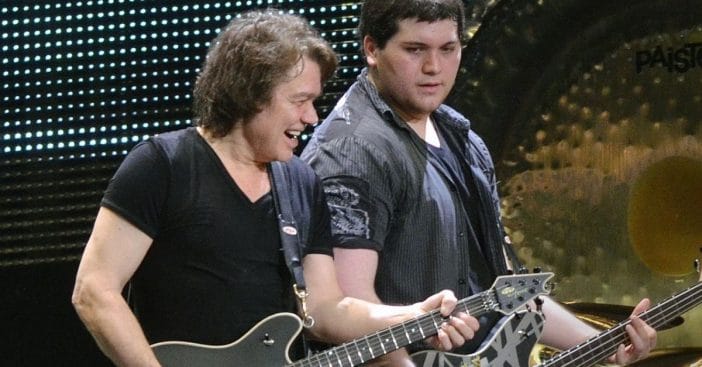 Tuesday, January 26th would’ve been Eddie Van Halen’s 66th birthday and his son, Wolfgang, made sure to pay tribute to the late rocker. “Happy 66th Birthday, Pop,” he writes in a tweet. “I wish I could give you the biggest hug and celebrate it with you. I love and miss you so much it hurts. I don’t even know how to put it into words.”

He continues, “I’ve been doing my best to hold it together, but g——-t it’s really tough being here without you.” Wolfgang follows up with another tweet, “Not a second has gone by where you haven’t been on my mind, and today will be no different… Love and miss you beyond words, Pop ❤.”

Not a second has gone by where you haven’t been on my mind, and today will be no different.

Love and miss you beyond words, Pop ❤️ pic.twitter.com/kU7MhKpbiO

The tweets were accompanied by two home videos from 1994 – the first video featuring Eddie and Wolfgang playing, and the second video featuring “Wolfie and daddy” hanging out on Christmas Eve. Eddie sadly died back in October 2020 after battling throat cancer. He told Billboard Magazine back in 2015 that he had one-third of his tongue removed due to the cancer that spread to his esophagus.

“I used metal picks — they’re brass and copper — which I always held in my mouth, in the exact place where I got the tongue cancer,” he says during the interview. “Plus, I basically live in a recording studio that’s filled with electromagnetic energy. So that’s one theory. I mean, I was smoking and doing a lot of drugs and a lot of everything. But at the same time, my lungs are totally clear. This is just my own theory, but the doctors say it’s possible.”