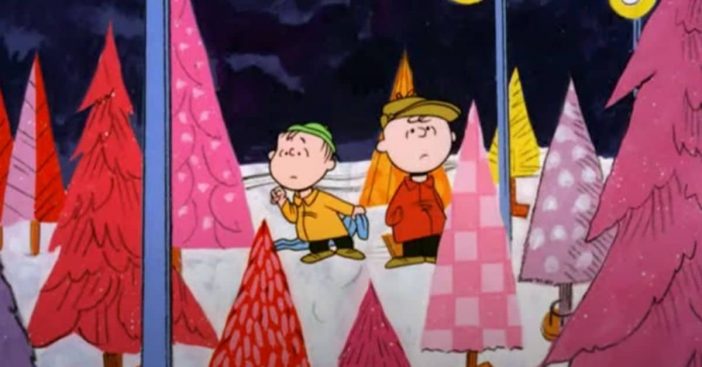 For a long time, aluminum Christmas trees were the popular thing in ’50s America. And even though they’ve faded out into the 2000s, some people still prefer them over a traditional green tree! The psychedelic rotating projection lights were all the rage, that is, until 1965, ironically the same year that A Charlie Brown Christmas was released.

According to Neatorama.com, “Aluminum Christmas trees were at peak sales from 1958 until the airing of A Charlie Brown Christmas.” They continue, “When Charlie Brown and Linus arrived at the tree lot, there were plenty of fancy aluminum trees for sale, but the only tree that catches his eye is a little sapling. It was also the only real tree on the lot. When he arrives back to the set of the play the girls started mocking him for choosing the ugly little tree. In a fit of frustration, he loudly asks if “anybody knows what Christmas is about?” Linus said that he did and then started quoting the Annunciation to the Shepherds from the Bible.”

RELATED: The Peanuts Specials Are Coming Back To Cable After Outrage

With this being noted, A Charlie Brown Christmas may have sparked the end of an era. As thousands of households tuned in to watch the beloved Peanuts special for the first time, it may have lit a fire under Americans of that time period that their aluminum trees were feeding into the Christmas commercialization that Charlie Brown mentions. Do you believe it?

Click for next Article
Previous article: Scott Baio Did Not Agree With Recent ‘Happy Days’ Fundraiser
Next Post: Julie Andrews Really Struggled With The Opening Scene Of ‘The Sound Of Music’