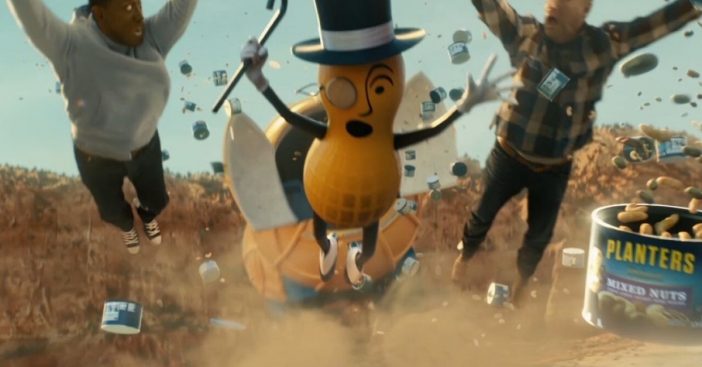 After 104 years of greatness and deliciousness, Mr. Peanut has died at the age of 104. He was known as the iconic Planters‘ mascot and the image you’d see on every Planters commercial. Now, a new pre-Super Bowl ad has killed off one of the world’s most beloved characters. In the commercial, he heroically sacrifices himself to save his friends, Wesley Snipes and Matt Walsh.

The three friends were driving down a road in the Nutmobile when Mr. Peanut had to swerve to avoid an armadillo. This sends the three of them flying from the car to dangling from a branch as their car falls off a cliff. He decides to let go of the branch and suffer a terrible death to make sure his friends can live.

Remembering Mr. Peanut and his legacy

We’re devastated to confirm that Mr. Peanut is gone. He died doing what he did best – having people’s backs when they needed him most. #RIPeanut pic.twitter.com/12PyWYJB7J

According to reports, Mr. Peanut’s funeral will air during the 2020 Super Bowl. “Mr. Peanut was more than just a friend — he was a hero. His passing has shook me to my core,” Walsh says in a statement. “I’ll do my best to honor his legacy and be there for my friends like he was always there for me even until our last wild ride together. I’ll pay my last respects during his funeral on Super Bowl Sunday. I encourage our entire nation to do the same.”

Mr. Peanut’s full name was Bartholomew Richard Fitzgerald-Smythe. He was born in 1916 when a young schoolboy named Antonio Gentile submitted his design for a peanut mascot to a Planters contest. Mr. Peanut would then serve as Planters’ mascot up until his untimely death. In addition, in 2010, he was even given a voice… Robert Downey Jr.

The Internet reacts to the sad news

As a result of the sad news, many are paying tribute to the iconic mascot online. Most of them are Twitter accounts from TV shows or food products. “Sending thoughts & prayers to Mr. Peanut’s family if he has a family, I’m not actually sure,” BoJack Horseman‘s Twitter account writes. Fellow mascot Mr. Clean writes,  “Always classy, always crunchy, always cleaned up nicely. We’ll miss him!”

“Help us give a 21 dunk salute to our nutty and sweet friend,” Oreo says.

He may have been completely nuts, but he died a hero. #RIPeanut https://t.co/3wdxokAUHk

We, too, would sacrifice it all for the nut #RIPeanut (a real one).

Snickers’ Twitter account writes, We, too, would sacrifice it all for the nut #RIPeanut (a real one).”

In conclusion, watch the madness unfold in the commercial, watch the video below. And grab your tissues!